A Cautionary Note On Motorcycle Clubs


I've never been a big fan of the motorcycle clubs. (By 'motorcycle club' I refer to the ones run by hobbyists rather than gangsters). Nor have I ever been a fan of biker culture either - the older I get, the sillier it seems. Not to be disrespectful to my fellow stubfarts - but guys...you're fat, you're old, and your old ladies are 'old ladies'! HAR HAR HAR!!! I can forgive all that because some of the machines are nothing short of metal gods - but I digress.

Awhile back Fearless Flapz F. bought a Harley and all of a sudden became the coolest piece of chit since sliced bread! He even went on Kijiji and found a beautiful leather vest for $40.00! Then he took it down to the chinaman at the shoe maker shop and had him cut it on the sides so that it laces up. That way, when his beer gut gets to be the same size as mine, all he has to do is let the laces out a bit and the vest will still fit like a glove. 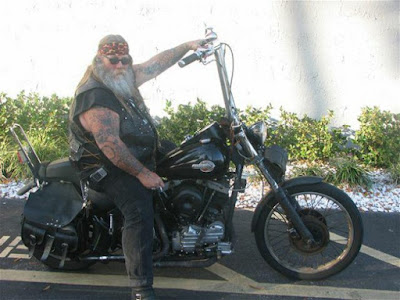 That's gonna be Flapz in 10 years, HAR HAR HAR! I suppose I shouldn't laugh - I could probably beer belly bop him and his bike into the middle of next week with my expanding gut... :(

But - I digress again! Jeez! Long story short, Flapz gets invited on a weekend ride and asks if we want to go. I declined for the reasons above and I also had chores to do - so off Flapz goes with his gal to ride with other Harley Ferguson aficionados. They met at Rosie's Bar for breakfast at 7:00 am and pitchers of beer were put out with the pancakes, bacon and eggs. Flapz figures it's a novelty thing and has a beer with his breakfast and thinks nothing of it.

Afterward the bikes fire up and the engines roar - and off they go! At a small, isolated rural grave yard about 45 minutes out of town they pull in, park - and the guys start rummaging in their saddle bags and pulling out beers! There's about 21 bikes on this trip. Flapz passes on the road rockets.

In any event, they ride the rest of the day like that, stopping for beers and chatter! Flapz estimated that by the time they got to Ryley (which really isn't that far from town) - most of the guys had drunk around 10 beers! And then they pulled into the biker bar in Ryley and had some more! One of the riders was an off duty cop from the Edmonton Police Dept. and was filming these bums as they filled their gullets with barley and hopps! Flapz didn't see if he was drinking himself.

I'm no prude. Gawd knows when I was a kid and this town was a lot smaller - I would go out with the boys and get sloshed and carefully drive home by the backroads. Some times I got so pickled I would pull into a pasture, park, and get in the back of the truck to sleep it off! Today, with all the increased traffic and idiocy on the roads - I wouldn't dream of it. On a bike? In a convoy? Oh boy...somebody's gonna get hurt. It's a matter of time.

My advice is to choose your riding partners with care. Be safe out there.
Posted by Glen Filthie at 06:12