A blogger I used to read liked to posture himself and pose as a rugged outdoors expert that knew the ways of the wild ...  and as an authority on hunting and fishing. If memory serves he lived in Chicago and he got away with it too. (I wasn't going to say anything, it was his blog, the fan boys ate his hogwash up and who wants to ruin a good yarn for the greenhorns and pork eaters?). The man was an utter ass hat, of course, and I savoured the high comedy of it behind the scenes and smirked and stifled my laughter.

One thing he liked to do was expound on the topic of bears. 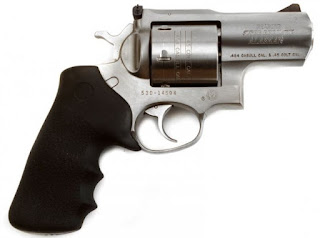 Meet the .454 Casull Alaskan. With full power loads this little snubby will develop
enough horsepower to kill on both ends. According to
my former outdoor authority, armament like this is essential
for the outdoorsmen in bear country...
I personally cannot think of a worse gun for the job than this one, myself.

Dear gawd - the man wrote of sleepless nights in a tent in bear country as the monsters snuffled and snorted outside the tent! This is how stupid people end up shooting themselves or each other - or worse - perfectly good bears that are generally big and happy and dumb unless provoked.

At the other end of the spectrum are the bunny huggers who fancy bears as pets. 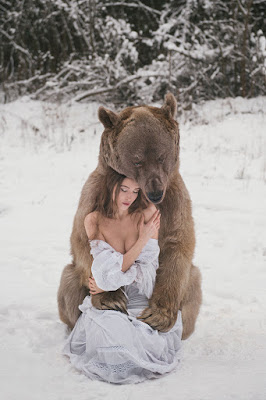 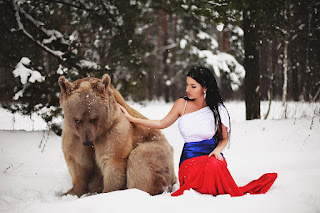 If I ever came across a scene like this, I would flip the safety off my .308, ever so slowly bring it around - and ask the lady to SLOWLY back away from the bear...

As with most things like this the truth is somewhere in between. I am not a wildlife biologist. I am not an expert. But I have spent more time than most in bear country and haven't had a single problem with them. I respect bears but I do not fear them - mainly because I take precautions.

I refused to hunt them and stand by that to this day largely because of the impressions I formed of this critter. Bears are big and happy and dumb when left to themselves - much like us. They are reclusive too - and will run from humans and especially dogs - which they hate with the heat of one thousand suns. This critter's idea of a good time is to flop out and bask in the sun in a garbage dump, pigging out on the refuse of humans. Or chowing down on salmon during the run in the spring. Bears CAN be domesticated as can be seen here - but they require very, very special care and handling. Properly raised they are fiercely loyal and extremely intelligent. Klondike lore is full of them, used as camp protection and pack animals by intrepid prospectors, trappers and adventurists. (Mind you, most of that crap was written by the same BS artists as the one I read who lived in Chicago).

As a game animal these critters aren't worth the time of day. Some people bait them to draw them into bow or rifle range and that is fine for them... but for me...? Back in my hunting days I preferred a bit more of a challenge. On the other side of the coin, they make excellent trophies and rugs. When my wife and I were kids she had a lucrative part time job sewing up bear rugs at a taxidermy shop.

If you're going to hunt them - go big, but for the love of God - be a sportsman about it and make damned sure you can hit what you're aiming at. Big, heavy recoiling guns need lots of practice from the marksman - and bears are built tough. They are regal animals and deserve a quick and honourable end. (All animals do, I suppose, but that goes double for bears). Bears get their fearsome reputation from slob hunters that only wound them - and a wounded bear is BIG trouble. If you try to kill them and muff it - they are gonna try and kill ya right back. Count on it.... and to be honest...you deserve whatever you get after that. Were I to hunt them I would take the classic Marlin lever guns in .45-70 - stoked to the balls. You have to bust bears up to kill them quickly.

If you are going to camp in their country, understand that it is their country and you are the guest. Don't leave your food or garbage out, keep your camp scrupulously clean - and do all the things you normally should do as a camper. I've only come face to face with them three times and at no time was I ever in any real danger. If they went one way, I went the other and all was well. So it will go for you.

Yes, sick and wounded bears may attack the hapless camper...but you can get struck by lightening, or hit by a bus too. You don't live your life in fear of stuff like that, nor should you live in fear of the Lord Of The Spruce/Moose country. Respect him - and he will respect you.