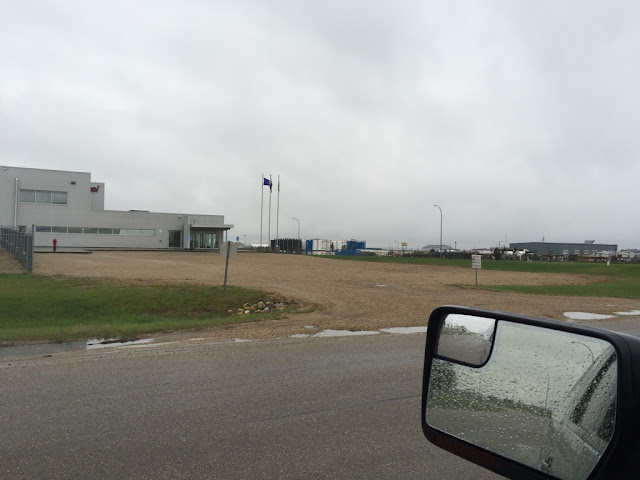 That is just the corner of the building. There is a 12 bay shop attached to the offices capable of handling everything up to and including the biggest trucks and heavy duty earth movers. All gone now.

In my post yesterday there was a link to an article about the idiotic premiere we have and how she and her clot headed commie cankles had just rammed through a new "carbon tax" aimed at relieving Albertan tax payers of another $3 BILLION dollars annually - mostly at the expense of eeeeeeeevil Big Oil too, no doubt! That wretched bint and her cronies were high fiving each other and bragging about it. It makes my fuggin blood boil.

That is the employee parking lot of one of my former medium sized customers in Clairemont, AB. Four...errrrrr....seven years ago, now, I guess - I walked in there off the street to sell some tools and the branch manager told me to hit the road and get lost. On the way out I noticed Ray and his crew struggling with some real nasty equipment that needed to be disassembled...so I stopped to chat and told him my tools would probably make his life 100 times easier. He told me to shut my gob, go get my tools and do a demo - and be fast about it! Long story short - the guys were amazed. They refused to give me back my demo equipment because they were so far behind and had so much work to do with it - and placed the first order of around $30k. I escaped with the PO when the other shop guys on the other side discovered the tools and they started fighting amongst themselves over it! By the time the smoke cleared three months later they probably bought $40~45K off me and we had the bulk of their tool maintenance work too.

I got on the horn and told The Crack to send me more demo equipment because the guys in Clairemont had stolen mine - and then picked it up in Hinton, AB and went in to Teck coal to see if I could interest them. "Get lost, Filthie!" they said! On the way out I noticed some contractors from P&H Minepro struggling with some big bejeezus Superbolts...and did the same thing again. When the guys at Teck saw the guys at P&H working with the equipment they changed their minds and started fighting over the equipment with them too! I got mugged by the shop foreman and dragged into the purchaser's office to arrange for credit apps and paper to be pushed...and those guys probably did over $100k with us that year.

Today Teck is on the ropes and my customer at Clairemont has closed the doors - and our stupid old woman of a premiere is bragging about increased tax revenues. On this business trip it has been a very quiet week and I am seeing a lot of commercial and industrial property up for lease.
Posted by Glen Filthie at 18:25