As always, Unca Bob is at odds with the Manosphere as am I. When the movement first arose I was heartily in favour of it. It was a revelation: no, Filthie, it's not just you. Or your friends. It's them - they're off their fuggin gourds and they are going to take you with them if you go along with them. "Them" being the feminists, the sexual degenerates, and the politically correct liberals that encourage and enable them. The cure pushed in the beginning by the Manosphere was to fall back on and develop the manly virtues: staying in shape, self improvement, keeping a positive lifestyle, living fully if sparingly - all that appealed to me as an Old World man, and probably a lot of old world women too. It was a healthy response to a bad social development.

As is usual with such things poisoned minds rushed to the head of the parade and pose as the leaders. Bob points out Vox Day and Roosh but there's any number of others. There's no doubting that they talk a good talk when they're on but push un-manly conduct and use shit house non-science to justify it.

Like most young men they still think with their dinks and then wrongfully assume that women think with their vaginas. So it is - according to them - that Euro women invite hordes of filthy black moslem immigrants in hopes of getting railed by big, black cack while their effeminate beta men sit around and allow it! HAR HAR HAR!!!! HAR HAR HAR!!! Hey - don't get mad at me - that's what they are saying...not me! If you want to scold me for being a shit by laughing at it - point well made, HAR HAR HAR! 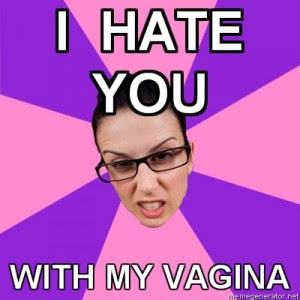 Oh yeah? Well my ass hates you, chickie, and if you don't
stop that infernal bitching it will say so in no
uncertain terms, HAR HAR HAR!
Smell the love...! PBBBFBFBFFFFFFFT!!!

Women think with their emotions far more than their vagina. And just as a man can be led astray and betrayed by his nads - so it goes for women misled by their emotions. Historically, women have taken the mightiest men down by appealing to their libido and using it to betray them. So it goes that men have done the same to women by manipulating their emotions.  Of course all this goes out the window for men and women with triple digit IQ's - they know they are being played and they know who the players are.

The Battle Of The Sexes has already been fought and lost by all who were dumb enough engage in it. The world is full of lonely old cat ladies and desperate fading cougars. It's full of sad old bachelors or bitter, unfulfilled young men trying to pretend that their lack of success with young women is intentional and of their choosing. Nobody gives a shit about the kids born into the middle of all this. Outside of that moral and ethical shit storm are the sexually disturbed homo/metro/bisexuals whose degenerate lifestyles are the stuff of a modern day creep show. They are discarded clowns that people no longer laugh at or cheer for.

Just as biology, 250,000 years of evolution and hardwired genetic instincts have evolved our reproductive parts to fit together - so too have our psychologies evolved to compliment each other too. It isn't the church that decreed that marriage is 'one man and one woman' - it was Darwin and to a lesser extend - Murphy. That is the proper and healthy condition for the human animal - and anyone that deviates from that tends to end up unhappy.

While the boys of the Manosphere strut and posture, fume and ridicule... us real men need to scratch our heads and do some serious thinking. A woman's place is so clearly no longer just in the home - what is there for her? With modern conveniences and appliances the housework is done by 9:00am. What is she supposed to do with all that free time? Drink? Clearly, we need to make room for women in the workplace - how do we do that in a sensible, productive way that is fair for everyone? Current affirmative action hiring policies are driving our jobs overseas because vibrants and women are being promoted into positions they are not qualified to handle - and the results have been catastrophic. Our police, military and trades are being undermined by women that will pose a liability rather than an asset in job specific situations. This job is a lot harder than the liberal social engineers would make it. It's not as easy as telling your men to shut up and vote for Hillary. We need to get women into the job place and engage them and motivate them. Affirmative action won't do that. Affirmative action will not allow industry to properly take maximum advantage a woman's skill set. It is my scholarly opinion that with this shit show going on - the intelligent people are either quiet and thinking - or asking questions.

The idiots are the guys that claim to have all the answers.
Posted by Glen Filthie at 06:55