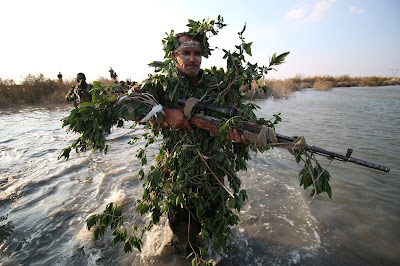 What is that? A Dragunov?

Right now the flavour of the day at my rod n gun club is the precision rifle! Which I find hilarious - our range only goes out to 300m and no self respecting precision rifle can even stretch its legs in that. To put them to the test you need to reach out to ranges like 600 yards and more! Good lord, the money those guys are sinking into their guns - and the ammo! They old farts banned the .50 BMG off my range and we had a stubfart civil war in the clubhouse over it. I just laughed when I heard of it, and made some rude joke about old farts and their battles. I have no dog in that fight.

The ERT guys (Canadian version of SWAT) are guest celebrities at our club and none of them can shoot worth a damn. They shoot light snipers and seldom go over 300m. When they're finished practicing they leave a pile of .308 brass behind - and I scoop it before the other old farts can get it, HAR HAR HAR! You snooze, you lose assholes! :) :) :)

The military sniper like this fella is a different can of worms. He not only has to shoot like a sorcerer - he has to be able to disappear like one too! His real game doesn't begin until after he's made his shot. It may be impossible to see that guy above when he's set up, lying prone 700m away. Once he moves, though, he stands out like a sore thumb! And then - the chase is on!

Snipers have been whitewashed and glamourized by Hollywood. In point of fact the sniper is considered by most squaddies as the most despicable, dishonourable soldier there is. They don't fight fair, they run after they strike, and they kill without honour. Quite often, they are not treated well if they are captured.

I saw a documentary on them once where they had a challenge out for all law enforcement and military snipers. They played the game: a panel of vets sat out in the middle of a huge field with binoculars, spotting scopes and a jug of coffee. The sniper teams were given blank ammo and ordered to move in close enough to take the shot. The spotters caught most of them as they moved in because they couldn't conceal their movements. A few managed to get a shot off - but were caught as they moved out. Out of about 60 contestants, only four managed to get in, make the shot, and then get away undetected.  They set up other gruelling games and it looked like a lot of fun to play...but it wouldn't be a job I would want.
Posted by Glen Filthie at 07:00