The Banners Are On Very Thin Ice


Earlier in the week I had some choice words with some idiot that was advocating the ban of AR15's (and, one would assume, other military style "assault weapons") - because some moslem fudge packer flipped his gourd and killed a bunch of queers (gee whiz - who woulda seen that one coming). I was later shocked (SHOCKED, I tells ya) to learn that ol' fella had some psychiatric problems of his own to deal with. Most of these nanny state types do. The good news is that it isn't going to happen. AR's and military rifles are flying off the shelves again, ammo sales are way up - and the public has spoken: F-off, fascist! 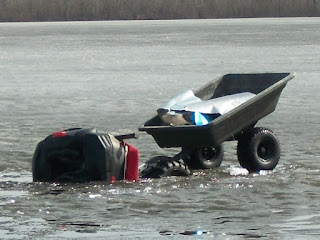 
Years ago the nannies, bedwetters, snivellers and panty waists up here in Canada got their knickers in twist because of us horrible, horrible ice fishermen. We would go out on the ice where we would get drunk, and have occasional mishaps like the one Uncle Bob had above, HAR HAR HAR! The poor bugger had to go 8 feet under water just to get away from the nagging, whining and bitching! 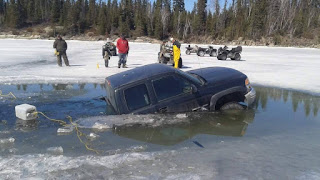 Stackz O. Mags to the rescue!!!

Clearly, something had to be done! And of course, some fat old woman had the perfect answer: ban ice fishing! 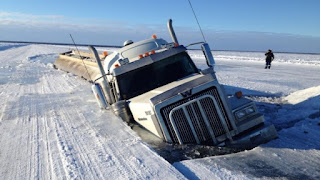 PP arrives with a load of fuel and prepares to take it down to the boys below!


The result was stunned silence - and then a veritable explosion of derisive laughter from the public. How did this clueless bint propose to enforce it? Well - the RCMP of course! They have lots of time to keep old stubfarts like Yours Truly from endangering themselves!

"So," the public responded, "What are they gonna do when they spot Old Man Filthie out on the ice with his illegal ass box and restricted tip-ups?"

The old harridan exploded "Why they would march right out on that ice and.... and...." ...and the light bulb went on.


The Orlando shooting has all the old biddies with their panties in a knot. We had the same thing happen up here in Canada back at the turn of the century when Mark Lepine went into a university class full of 'Wymen's Studies' students - and open up with a Ruger Mini 14. (Not many people know this, but with a name like Marc Lepine, you woulda thunk he was a fwench-Canadian. Turns out his mom was a mudsharking fwench ho and his father was a radical moslem turdie! Who woulda thunk it???) In any event the liberals lost their shit! They pulled Bill C-68 out of their collective leftist ass overnight, and rammed it through the legal system almost overnight! And as with all these knee-jerk responses, they had to pass the bill to find out what was in it afterward. Here are just a few of the better ones:

The liberals creamed themselves with joy! The job of enforcing this triumph of liberal social engineering was handed off to a short, pudgy little man named Allen Rock. It was the chance he had waited for all his life, no doubt. Next thing ya know, the sawed off runt was strutting in front of the cameras, waving his pudgy little fists around and screeching about 'house-by-house' searches for unregistered and illegal guns. It was the only way to get them all off the street, dontchya know!!! And he was right. And that is when the wheels came off.
Today the laws are still on the books, but the vast majority of them aren't enforced. Most AR guys will still go out to the gopher patch with their AR's - or set up informal 3 gun shoots in the back country ... and the cops look the other way as long as we are courteous and discrete. Most of our cops are good men and I have not heard of a case yet where they did a search and seizure without the proper warrants and due process. They did grab some guns from a town that had evacuated during a flood (supposedly taking them to keep looters from getting them) but the Prime Minister himself dragged the canary legged faggot responsible out on the red carpet - and made him apologize and return them.

So while the liberal ass hats may think they want a police state... once they see what it entails, I suspect reason will break out in all but the most liberal bastions of leftist stupidity. In any event - if you don't have an AR15 - get one soon. You're missing out on a whole lot of shooting fun. And - if ya haven't tried ice fishin' yet...ya need to jump on that too!