The Height Of Manly Fashion 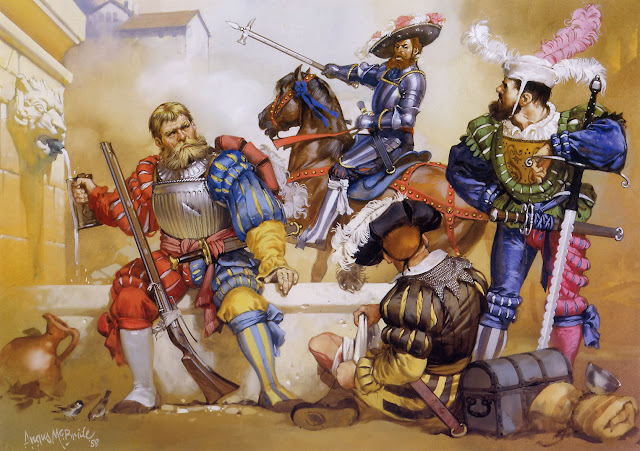 As I get older and more and more disgusted with current times, I've found myself becoming more and more of an amateur shit house historian. These sportily clad gentlemen would have been the Navy SEALS or SAS of their day. That gent filling his tankard is armed with a state of the art matchlock arquebus. That fella that looks like Popeye The Sailor in drag sports a two-hand broadsword. Looks like they've done well in the pillaging and raping - like they probably cleaned out a bank, or a church or an enemy nobleman. Good work, boys! In those days flamboyant clothing like that identified you to your friends and enemies and marked your status. I am thinking these guys are Swiss but a better historian than I would know for sure. More research is required.

Had it gone the other way, and we had defeated them - peons like us would risk our lives and even spend them trying to take one of them alive. If you lived to capture a nobleman like that you could ransom him back to his family in a time when just one of the gold coins in that chest could set a peasant up for life!

Americans brag about their wins against Britain in their war for independence and historians often gloat about their superior tactics over those of the red coats. What those revolutionary Americans and their founding fathers did though - was actually remove any last vestiges of chivalry, honour and sportsmanship from war. (European combatants are sternly reminded: No fighting on Sundays! If in doubt, or in the event of a violation, contact your local archdiocese immediately!) Recently, on the internet somewhere I came across a transcription of a passage in black letter where a nobleman from the 1400's praised his good wife for a wonderful birthday present - morning star!

I get it. Yes, yes you would see stars after getting gooned with that...assuming you survived...
Able to defeat the finest Toledo steel plate armour, this weapon is the perfect gift to the sporting nobleman in your life!

After I'm done writing this I am going over to Knuckle Draggin to give Wirecutter shit! He should be selling these on his website too! HAR HAR HAR! (I had better not wear my pantaloons when I do that though - he's liable to start screaming about people from California, HAR HAR HAR!)

The Americans put an end to this kind of warfare with surprise hit-and-run assaults on British expeditionary forces and guerilla tactics... and from there the game went downhill. Camouflage. Stealth weapons. Electronic counter measures, weapons of mass destruction, space based weapon platforms, terrorism... GAH.

When the greasy elderly hippies and pasty faced peaceniks claim there was never any glory or heroism in war - they are full of it! There was a time you dressed brightly and taunted your enemies to come out and face you. Leaders were expected to and did fight alongside their men. War was about greed and nobody made any pretentious lame justification for it. It was a fact of life that everyone took for granted. Life was a fleeting thing and there was precious little time for sanctimony, hand wringing and snivelling, Heroes died on the battlefields and lived forever. All you needed was permission from the church and a sign from God that you were righteous and pure...and you were good to go!

Looking at the way wars are started and waged today by supposedly democratic gubbiments, supposedly fought by the rules of international law ... and the results of them ... I wonder if those guys didn't have a better way of doing things than we do today...!