Thoughts On The Brexit

The EU was a great idea in concept but it was bound to fail. In the USA and here in Canada every time you turn around somebody is bitching about those 'clueless *****' in Washington, or those cloistered ***** in Ottawa - and they are completely right to do so. There is no cultural crossover between the sleazy New York Politician or the rancher in Texas. There is no connection between the Alberta rig pig and the homo/metro/bi-sexual freak shows in Quebec and Ontario. They have different values, different problems and different answers. When your leadership is too far away from you and your problems and challenges... they can't possibly govern you effectively or look out for you.

It's been my experience in life that people get in the most trouble not when they get greedy - but when they get lazy. Lazy people cop out - and that defines liberalism in a nutshell. They think they are being punished when they are put in situations where they have to work, or think, or make a sacrifice now that will improve their futures later. They want somebody else to carry the load, to make the tough decisions, to take the financial hit and pain that goes along with being successful - but they fully expect to share in that success when they've contributed nothing to it themselves. So it was that fwench and German taxpayers found themselves on the hook for Greek, Spanish, Portugese, Italian and Irish fiscal irresponsibility. The parasite will give you sanctimonious lectures about greed and altruism as it kills you. If you let that parasite do that for too long you will get so weakened that the cure that kills the parasite may kill you as well. The elites of the EU don't seem to care as long as they get their cut. They are so rich and powerful they can cash in even when Europe burns.

Today Britain chose the harder path. They have accepted responsibility for themselves and their future and no matter what happens I am with them. This is how problems are solved: take responsibility for them, own them...and solve them. If you pass your problems onto someone else you may not care for how they choose to deal with them and the consequences might even be worse. 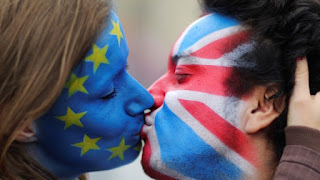 You're better off without 'er, mate.

All the best to you Britain. Hopefully the rest of them follow suit. My prediction is that the short term will be full of screaming, bitching and whining... but if they can stay the course, 10 years from now they will be happy they did what they did. 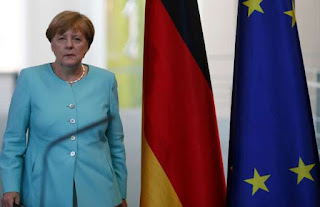 This is what stupid, arrogant old liberal women look like when they get mugged by reality.

I can't believe it. They're actually shocked! "Who woulda seen that one coming?" Merkel clucked, "Who woulda thunk it???" This is how 'out of it' these leftist idiots are. They live in an echo chamber of political correctness, virtue-signalling and cultural fascism - that they can't even imagine people wanting to do for themselves - much less people who refuse to bow down to them. That picture just made my weekend! I hope to see a similar expression on Hillary Clinton's face in the fall! The Brits stepped up...it's high time the rest of us did as well.﻿
Posted by Glen Filthie at 06:29