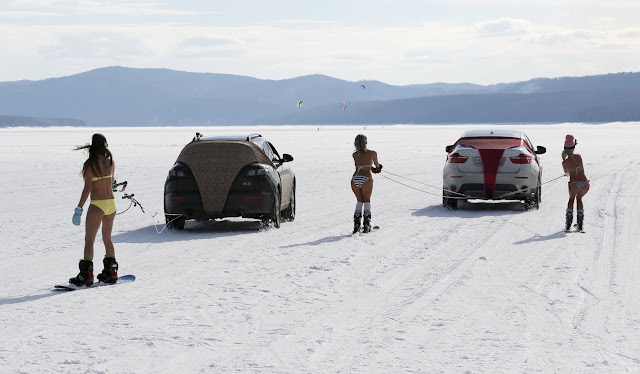 When I was a kid we had a hapless school bus driver named Martin. He was an old, semi-retired stubfart driving a school bus to get him out of the house and blow the dust of the ol' brain box. He always treated us kids with restraint but we crapped all over him in return.

When his bus passed our house in the winter time there would always be a rug rat or two bumpering on the back. We used to have these crappy, white rawhide moccasins from the Army & Navy store that had smooth soles that just glided over icy, snowy roads. Poor Martin had kiniptions because us kids were prime Darwin Award winning material.

One day he stopped the bus to pick up some kids. He pulled to a stop, reached over and opened the door for the kids to board - and almost had his head taken off by an incoming snowball. The big kids had arms like cannons and Martin took a direct hit right in the ear! Ever see those JFK assassination clips? It was like that - his head snapped and lolled to the side, his glasses flew off - and it took the poor old bugger at least five minutes to find his glasses and get his brain working again.

It was my brother that threw that snowball and I ratted him out as soon as we got to school and again at home. Pop put the wooden spoon across his ass and he drew major detention time at school and he bloody well deserved it.

Of course I got beaten up and had my face washed out with snow by him and his gang afterward but I stuck to my guns and told those assholes that if they did it again I would rat them out too. I got beat up a lot that year, they usually got me after school when I was doing my paper route.

This was back in the early 70's, and Martin is almost certainly long gone ... but these snow bunnies are for you, Martin! I don't know where you are now, but may your winters be milder, and the kids on your bus route be better behaved!
Posted by Glen Filthie at 04:54