Because it's been a whole week or so without a post about GARBAGE!

He shoots...! He GOOOOOAAAAALLLLLLS!!!!!
If you've never played table hockey - you
are missing out.

Up here in Canada the province of Queerbec is rightfully held in the same degree of contempt that you Yanks might reserve for a place like NYFC. 92% of Canada's biggest assholes come from it's three biggest cultural sewers: Hongcouver, Tranna, and - most of all... Mon Trail!

Contrary to popular belief there's TWO good things that come out of Queerbec: the road coming out of it, of course...and the Montreal Canadiens! 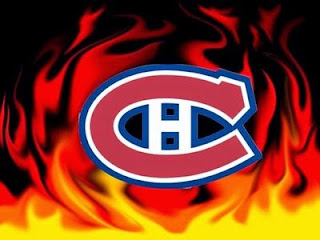 Fromage au cottage! That's fwench for 'There's
something good about everyone' - even fwenchmen!'
Betchya didn't know Old Man Filthie was a sophisticated and cultured linguist,
didjya?

With the help of these diabolical fwenchmen, I figuratively skull raped my idiot father in law and stepped on what was left of his brains with dirty shoes! HAR HAR HAR! It was awesome!

It was in early summer, 1993 when my father in law was in his own private version of heaven: he had a mason glass full of home brew, and the hockey game was blaring on the TV. He and I were polar opposites on most things and hockey was no exception. He had no problem with fwench-canadians but made an exception for the Habs whom he hated with the heat of 1000 suns on general principles. I had no use for fwench-canadians but made an exception for the Habs. The playoff finals were in full swing and the Habs and the LA Kings were duking it out for Lord Stanley's Cup.

"What kind of fuggin idiot watches this dreck," I asked my father in law. "It's all fixed - the Habs are gonna win it and everyone with a triple digit IQ knows it." Oh man... Doug was ordinarily a civil man but that night I scored a direct hit on his bang button. "Oh piss off, Glen! Why would you even say something like that? The Kings are going to crush the Habs - and all the experts know it. Shut your friggin gob." I cut a billowing fart and left him to his retching and his game. The Kings won, and Doug got out of his chair to do the Hideous F*** You Dance for me. I feigned indifference and nonchalance. "Fixed!" I snorted. "Screw you!" he responded.

Couple days later I caught up with him after game 2. "Why, lookit that, Douggie - the Habs won! Who woulda thunk it Doug? Who? Oh wait - why...I did! The Habs are gonna take the series! The outcome is only in doubt among stupid people and wankers that don't understand that the whole shootin' match is FIXED!" The Old Man was in a snit. "You're full of shit and twice as thick," he grouched. I shouldnae  razzed him because he lived for this stuff. I started feeling sorry for Doug and decided to stop teasing him about hockey. Sometimes discretion is the better part of valour, and to be truthful the old buzzard's team could still win it - and if that happened then there would be no putting up with him.

I can't remember what it was. Some passing insult? Some cheap shot? Whatever it was, Doug had pissed me off and I decided to start tormenting him again. The Habs won game three, and my father in law started to lose his chit. "How much money have ya got, Glen? There's not a hope in hell of those filthy Frenchmen winning this! Care to place a small wager?!?" Hooo boy! Ol' Douggie was smokin' mad! HAR HAR HAR! "Not a chance, Doug. Ya see, I have a triple digit IQ and this shit show is so obviously fixed. If I were to indulge in that wager I would be taking unfair advantage of stupid people - which of course, goes against my creed of chivalry and honesty...". The stench of my own pretensions even made me a little green, HAR HAR HAR!

Back then I still chewed tobacco and Dean and I were outside loafing and gobbing and shooting the breeze. Dean actually WAS a talented linguist. He could do any number of superb impersonations and for the price of a can of snuff and a beer - he called my father in law during the day to leave a message on his voice mail. Back then voice mail and cell phones were still a novelty for the cool kids and high rollers and Doug liked to make a show of his high tech savvy as he checked his messages and flipped his cell from time to time. I was there well before Game 4 when he was going through his messages for the day. He even had the speaker box going to make his high tech show even more impressive to his ignorant peon of a son in law. A heavily accented, deep voice boomed out from the message machine:

"Allo? Allo! Dis is Patreek Waugh, goal tender for da Mon Trail Canadiens... hand I ham looking for Douglas.... Douglas, I understand you 'ave a problem with da team, hand I would like to discuss it with you in the parking lot of da Aaadmontim Coliseum hat your convenience...AFTER we win da Stanley Cup in Game Five..." Doug slammed the phone down and pinched the bridge of his nose. Looked like he had a migraine coming on. Somehow, by the grace of God I managed to keep a straight face and appear relatively innocent. "Sounds like ya really pissed off the best goalie in NHL history, Doug," I said disapprovingly. The poor man looked like he had swallowed a turd. Dean should have won an Oscar for his performance!

Game 4 was roller coaster. The Habs would score a goal and I would yawn. "She's a done deal, Douggie. Aren'tchya glad I didn't make that bet with ya?" Then the Kings would score, and Doug would flip out in glee and tell me to shut up or put up - he was still willing to bet. The nerves of the players were flayed ragged but finally the Habs won again - and Doug was coming apart at the seams.

Game 5 wasn't even CLOSE. Those horrible Habs WALKED all over the LA Kings and wiped their muddy boots on them. The Kings had lost their nerve and caved under the pressure...and so had Doug! The old buzzard sulked in his chair and inhaled an entire mason jar of home brew at a breath. 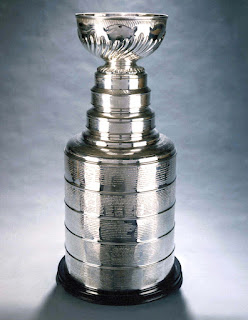 "Well, well, well," I said in a chit-eating tone of voice, "Who, Doug, in your opinion, is the ultimate authority on the sport of hockey? It certainly isn't dapper Don Cherry, is it?" Poor Doug - he was a sickly tone of grey. "Jesus Christ!" he mumbled. The poor man looked physically ill: the team he hated most had taken the Cup, his asshole of a son in law had told him it would happen when all the experts guaranteed it wouldn't, and the salt stung badly in the open wounds ... and now it was all over but the gloating! "It is just as I said," I lectured in an insufferable manner, "It's like playing a game with a child or a retard. You have to let the retard win once in awhile, or he gets depressed, loses interest and walks away... and that's why the Habs had to win this series..." 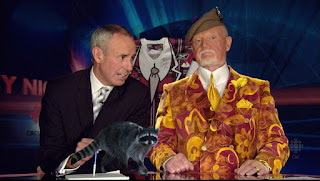 Is Don Cherry still alive? Looking at Don,
is there anyone out there that wants to dispute
the fact that NHL hockey
appeals to the idiocracy?

Poor ol' Douggie looked physically ill. And foolishly, I started to feel sorry for him again.

"Okay! Alright! I'm done effing with ya, Doug! I admit it! I didn't have the slightest clue who was gonna win, I pulled it all out of my arse and I even had one of my friends phone you up and pose as Patrick Roy! I shouldna been such a dink about all this and I'm sorry."

By way of apology I produced a bottle of cheap 5 Star whiskey and the poor old boy gulped half the bottle down before pausing for a breath. I'm not lying either - poor Doug was so distraught he was chugging whisky! CHEAP whisky! By the time most of the bottle was gone and he had fallen asleep in his chair - I had been grudgingly forgiven for my ignorant priggishness. 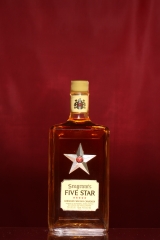 Fair warning: this rot gut isn't fit for the thrill of victory OR
the agony of defeat.
But - if it's all you can afford, it's better than nothing.

That's it for the hockey lore of Castello Di La Filthie, on this sweltering sunny summer day. For a better appreciation of this most Canadian of sports, and of fwench-canadians that are an indispensable part of it...

Today the Habs are a bunch of worthless bums as are the Aaaaaadintin Oilers and a few other favourite teams. They say that time is circular, and what has happened before will eventually happen again. One day the planets will align, the heavens will shine down on Queerbec and the Habs will win the Cup again. When that happens... I will give it to Doug again - with both barrels! HAR HAR HAR!!!

I suppose I shouldn't have referred to Doug as an 'old boy' in my foolish narrative above - back in the early 90's he was about the same age I am now. It makes me wonder if I am as clueless and retarded as he was now that I am an old fart too...?
Posted by Glen Filthie at 16:01