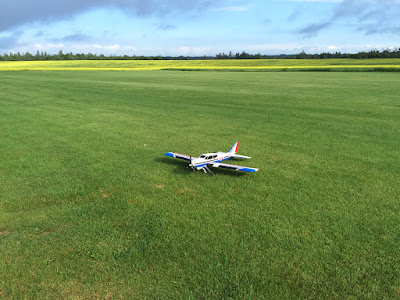 Today is a milestone of sorts. For RC wieners the progression of training starts much as it does for real pilots: well behaved high wing trainers, to well behaved (and faster) low wing trainers - and from there on to whatever widow-maker the pilot prefers.

Today I flew my first low wing tail dragger which I call Fuji Hakiyito - a modded Twinstar. This is ordinarily a multi-engine plane that now has a single engine and the tail dragger rather than tricycle landing gear. My first flight was a pant-filler... tail draggers need lots of rudder and the centrifugal effect on take off was very pronounced with this plane. I went round came in for a perfect three point landing - and then lost my shit. The little bugger veered to the left and bumped into a picnic table off the runway. No damage - just very, very embarrassing. Subsequent touch-and-go work was unspectacular. Fuji is much faster than Super Dave Osbourne in the air...but he flies with more precision and control too.

Yesterday was a good Canada Day, we had jets and warbirds out at Bremner Field, today was a successful flight qualification... and today it's Pop's 75th birthday.

Weekends don't get much better than this!

Catch ya later!
Posted by Glen Filthie at 08:58