Today I'm here at the Coopville Landfill sifting through the refuse and garbage and looking for treasure! Go for the wide brim hats, everyone! Unlike us, those chit hawks aren't here for fun. 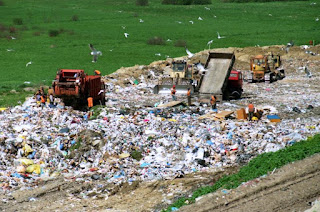 Pickins' are slim today - but - wait! Is that what I think it is? Aye! It's a pizza box! Awsome! So what, you knuckle dragging dullards are asking. 'Whaddya gonna do with a friggin pizza box, Filthie?' you ask.

I am going to make a flying machine of unimaginable destructive power.

Hmmm...looks like BW threw out some dented up gutter pipe! Why, if I can find a long enough section that isn't bent or dinged...I will have my own fighter plane!


The old farts down at the RC airfield were dog fighting these today - and what a blast. About 12 of these garbage-can fighter planes were in the air at once and the fighting was as mean and vicious as the Battle of Britain! The birds have a length of toilet paper flying behind them and the object of the game is to cut it with your prop. I've never seen old farts having so much fun in my life.

They're made out of junk so when ya pile them in you simple scavenge the engine and electronics - and put them into the next Frankenplane you build!


Garbage can bush pilot!
Fun is where you find it.

Keep yer stick on the ice.
Posted by Glen Filthie at 13:25