One of my favourite black rifle geeks - Stackz O. Mags - went MIA awhile back because he started making money and was afraid his creepy fans in the blogosphere would start hitting him up for cash and loans. He was too smart to lend me any money, but that's the story of my life. For now I make a modest living taking Uncle Bob's beer bottles in to the refund depot.

In any event ol' Stackz is doing so well, he's throwing his beloved AR15 in the garbage (screw you, I got dibs) - and has decided to go a little upscale! 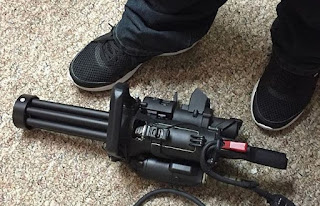 Hmpfffff!!!! That boy's doing so well, stacks a mags full of ammunition doesn't cut it anymore! He's buying his ammo by the friggin yard!!! 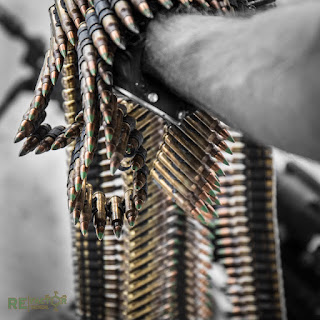 Incidentally, the phrase "I gave him with the whole nine yards..." is a slang expression that comes to us from the gunners on the B17 bombers of WW2. When they were fighting pitched gun battles over Germany each gunner had a belt of ammunition that was roughly 9 yards long. If they survived, when they returned to base, out of ammo they would brag that they gave "the whole 9 yards" to the Krauts.

That's a serious dose of Hell when you're talking about .50 BMG.