When I was a kid my father suffered from chemical imbalances in the brain. He developed the problem in his mid-40's and went from being an affable, likeable fella to a morose, sometimes abusive and angry man. For awhile he was deeply disturbed and troubled and it was touch-and-go for our family for awhile. For me as a kid - it was difficult. But we have great doctors nowadays and all Pop's problems vanished as if they never existed when the doctors prescribed one simple little pill. Almost overnight Pop seemed to recover his stride and was back to being his old self within a week or so. At the time it was a miracle that brought tears to our eyes.

Sometimes, though, I wonder if they aren't running him a little rich on the meds, and maybe need to lean him out a bit. Every Sunday the old bugger goes through the obits in the newspaper looking for people and friends and acquaintances he knows - and he's chipper as hell about it! "Hey Glen, didjya hear? Looks like Stan Carmichael passed away on Tuesday..." and then he'll start reminiscing about what a dink Stan was and the trouble that they got into. I of course would stop and vapour lock for a bit because although I lost track of him long ago - I still remember how cool my hockey coach was and how us kids idolized him. It seems to be a thing with Pop. He's always done it too. 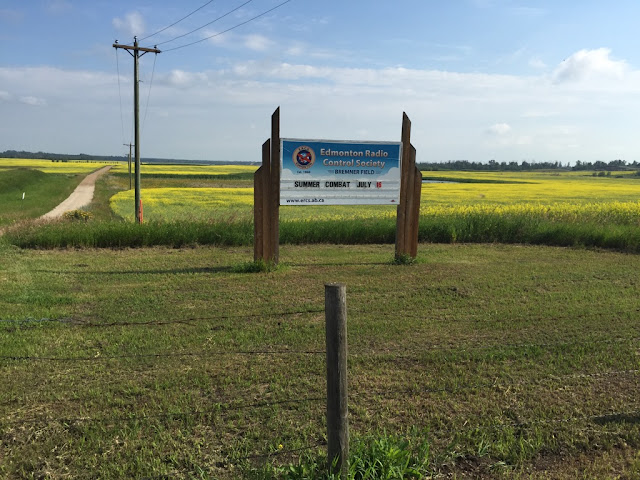 Yesterday the Velcro Shoe Gang converged on our airfield to duke it out for air supremacy. These guys are all in their 70's and there's no nice way to say it - they're in the home stretch of life, it's the ninth inning, and the fat lady is clearing her throat to sing them off as she will for all of us one day.

But for awhile, on a sun drenched Saturday morning - these grumpy old farts, these doddering oldsters and sullen seniors with their aces and pains and problems - laughed and guffawed like school boys as mayhem raged in the skies over Bremner. Ever listen to young boys playing with fireworks? These guys weren't just channelling their inner child - they were giving free reign to their inner idiot!

These air duels are not dangerous but there's hazards and like all old people, they love rules and strictly enforce them. Even my status as a superhero cut no mustard with them. Captain Sweatpants And His Crime Fighting K9's got busted for being out of bounds while watching the dogfight. The Air Boss sounded her horn, the pilots landed and me and the dogs caught major shit because we supposedly might have gotten hit by falling debris. (We were a quarter mile away - BUT RULES ARE RULES!!!). The dog fights last 10 minutes; when the Air Boss blows her horn the pilots all land... and one old fart went out on the strip to retrieve his plane while others were still landing - he got the horn and supreme shit too! Then we got buzzed by a curious chopper pilot - when real planes violate our airspace we are under strict orders to land our planes for obvious reasons - so the Air Boss blew her horn again, everyone landed... except for one old boy that decided to send his aircrapft aloft! He caught honked and supreme shit and the scolding of his life too! HAR HAR HAR! It's always funny when somebody else gets in shit, isn't it? 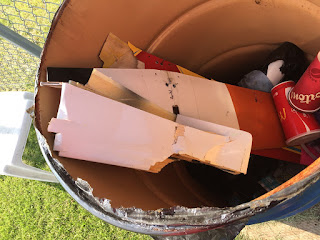 Couldn't tell ya much about the thrill of victory,
but the agony of defeat looks something like this...


One hapless old fart piled his fighter into the runway at full throttle...and suddenly their rules started to make sense. I could feel that thing it the ground from 40 yards away. (But yannow - when me and the dogs were out of bounds we were actually safer...when we got shooed back into the approved Spectator's Zone we were actually closer to the shrapnel and blast radius.... BUT RULES ARE RULES!!! HAR HAR HAR!) 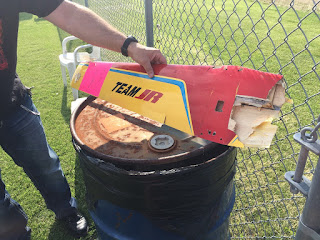 This is what an obituary looks like at
our airfield.

I'm beginning to appreciate Pop's take on obits too. Our airfield obituary is not published in a respectable newspaper - but in a garbage can! HAR HAR HAR! Awesome.  :)  :)

I suppose there has been a 'garbage theme' pervading the Thunderbox lately, and I suppose that it probably is offensive to my readers of cultured manners and taste (you two know who you are). For the rest of us, all good things must come to an end - so that's it for my infatuation with garbage, dumps, and waste....for now.  :)