PP has a better than average post up about our crumbling law enforcement. It's happening up here in Canada too. It used to be our RCMP were big, strapping white 'Duddley Dooright' types that were almost as much trouble as the average citizen. They went to the BBQ's and Bonspiels and ate and drank too much. They coached minor hockey and baseball and cursed out the refs and umps too much, and they had family problems and issues just like the rest of us too. I cringe when Americans open up on law enforcement - but as usual PP does pretty good.

Full disclosure: I stand by the cops all the way. I grew up shooting and fishing with them and as I said, those guys were all over minor hockey and baseball. When us kids were on the ice playing for trophies, our coaches were still law officers extending their friendly inter-detachment rivalries on to the ice with us. I am not a cop - but I know what these guys face and how it takes a toll on them.

We need to understand something right up front. It's not a case of law enforcement letting us down - it's US letting THEM down - all the way. Militarization of the police? You bet they asked for it and rightfully so! Officer Friendly and his .38 revolver can handle limited engagements. They can't handle a fortified crack house filled with felons with assault rifles and full auto machine guns. It's a no-brainer, John Q. Citizen: if you want cops to protect you from stuff like that, they need the tools to do it. End of story.

As far as the political correctness goes - the rank and file cops specifically DID NOT ask for that. When he objected he was called a racist, a sexist, etc ad nauseum by his superiors - all of whom were politically appointed social justice warriors. If he persisted in thinking a 105 pound oriental woman would not make as good a cop as a 220 lb. white man - he faced disciplinary action. The good cops quit and got fired or retired early when that shit started getting rammed down their throats... but John Q. Public sniffed in derision or shrugged, and said 'Good riddance!' 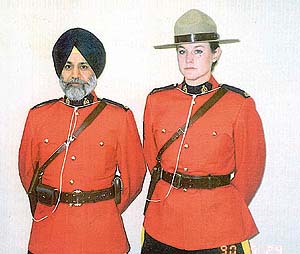 An old rag head and a serious looking femcnut.
How do you think they'll do in a bar fight against a
room full of pissed up rig pigs?
Screw you, you canary legged poseurs!

I am a law abiding man and if you think I would take attitude from either of those two ass hats - you have another thing coming. How in bloody hell am I supposed to take crap like that seriously - never mind a hardened criminal? Well folks - if you want third world law enforcement, your best vibrants are on the job. If you would rather see feminism than law enforcement, that chick is your woman. Or xhe might be something else that resembles a woman I suppose. Point is - the cops did not choose this. We forced it on them - and now some of us are mad because it came back around to bite us on the ass. Truth is, even with those two red coated morons - our law enforcement is light years BETTER than we deserve.

Another mistake PP seems to make is that the cops are ready to lay the beat-down on his arse for defending himself... and not the feral negro that thinks PP has too much money and has to share. All that is true - but WE the people make the laws and WE the people enforce them in the court. The cops follow our laws. That one is on us too. But our biggest sin against law enforcement is hardly ever talked about. Our liberal social engineers are running one failed leftist social experiment after another. As those experiments boil over and explode, the result is human shrapnel and failing civilization.

One day after stinking out the trap and skeet range I noticed the cars of a few of my friends up at the club house and figured I would stop in and say hello on the way out. They were all cops for the most part and since I like cops I was always welcome in their bullshit sessions. I booted in the door and stomped in ready for the usual jeers and insults and was gobsmacked by the silence.

Something was seriously wrong - Chris was in tears. Good lord, I have been in a pickle or two over the years but I NEVER saw a man so forlorn, so utterly broken as he was. His face was wet, he had snot running down and bubbling on his face and was sobbing in the big, gasping gulps of a man that had gone to pieces.

"FFS! Chris, what's going on here?" I demanded. Todd was out of his chair like a pistol shot! Next thing I know, I got Todd on one side, Scott on the other - and I am getting frog marched out the door! They let me go outside and I was hopping mad. "What in hell is that? " I railed, "And what's with Chris?"

"Go back inside, Todd, I got this." Scott was a senior detective with the city cops and pretty much the leader of their gang at the rod n' gun club. It turned out that they had found Punky Gustafson the night before. The entire city was worried sick about her, she was a five year old girl that disappeared on her way home from school a couple days previous. Chris was a first year rookie cop and first on the scene where Punky's body was found. She had been raped and murdered.

"Not a word, Filthie! The family knows but the thing is still under wraps. And for the love of God, stay away from Chris. We're not sure he's cut out to be a cop yet, and by gawd I think I may not be either these days....".

Stuff like that is cop life. They are out scraping your kids off the guard rails when they get cut on drugs and crash their cars, they get to knock on your door at 2:00 am and ask you to come down and bail your kid out...or ID them at the morgue. They have to treat scum of the earth that deserve to die screaming - like royalty. They have to defend the courts and the judiciary when sleazy lawyers like Hillary Clinton mock 12 year old rape victims and accuse them of "having a thing for older men...". They get no benefit of the doubt. The perp gets every benefit of the doubt. They hurt themselves and place themselves in great jeopardy to get scum off the street - and the judiciary does it's level best to put them right back out there... where the cops have to deal with it again. Usually the liberal infested judiciary succeeds. The populace blames them when repeat offenders do what they do. 8 hours a day, they do that. Domestic disputes. Road rage. Assault, battery, murder. Institutionalized injustice.

Folks - if you want to make a good man into a rage filled psychotic murderer... I can't think of a much better way to do it. How many Punky Gustofson murders do you have in you? How many beatings can you take from some feral black baboon who's life matters, and yours doesn't? At what point do you check out and stop caring? At what point does your soul and conscience rebel and push you into rogue territory? At what point do you decide it is more important to be a man of good conscience rather than a cop? Jobs that force us to separate our conscience from our character can only hurt us. There is far more to this than most people realize.

Your cops are all that stand between you and that human shrapnel. De-militarizing the cops will not make them better officers. Forcing them to accept low skill/low IQ vibrant and diverse officers will not improve their effectiveness. Bitching about them won't either.

We're not even having the right discussion! The discussion is 'Cops are all assholes' and 'Cops have no credibility'. Fine. How do we change that?