The 'Do It All Rifle'


The 'do-it-all rifle' used to be a mythological creature not found in the real world: it's deadly accurate for varmint and target work and it's of a calibre that will take down anything that walks anywhere on the continent. When bullet technology finally caught up with the times all that changed. 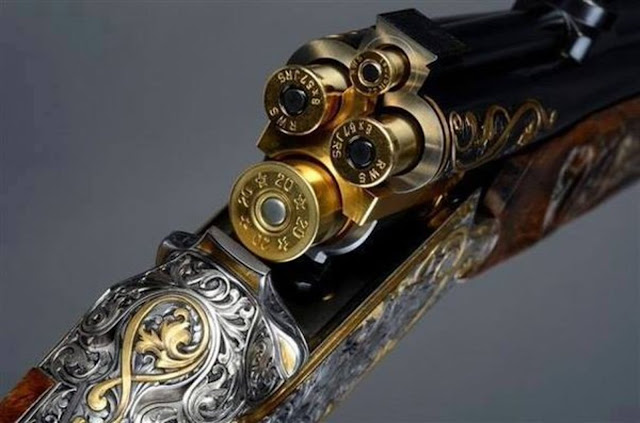 The gun above is technically referred to as a 'Drilling'. They're not common and their popularity seemed to be with the Euros - back in the day when the titled rich and noble classes ruled the roost. That thing has a barrel for every occasion and I would not want to be futzing with the selectors when a shot presented itself... but guns like this aren't about hunting.

For the man seeking the 'do it all rifle' the experts and gun gurus will tell ya it isn't possible to have a gun that will function in every scenario with aplomb. They're full of beans, of course. There's actually several that will: 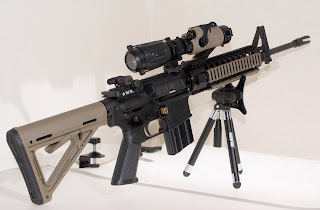 Knock out two pins and the receiver and barrel (the 'upper') come off the AR15. Start with gophers in the classic .223 caliber in the morning. Swap uppers for something like the .458 SOCOM and you're hunting deer in the bush after lunch. Swap in a precision air-gauged National Match upper for the shoot at Camp Perry for the afternoon. Finally, swap in the 7.5" upper for home security and house cleaning before ya go to bed. This beast will bring home the bacon and the trophies - AND put paid to gophers, tin cans and hobgoblins with aplomb.
It doesn't get much more versatile and practical than that!

It's too bad Stacks O. Mags isn't around - he was an expert in the AR15 but old farts like Carteach0 and Wirecutter are familiar enough with this gun that they can be relied on for good advice when dealing with them. I have one in a 7.5" chopper that I shoot at the range for gits and shiggles. My preferred high power match rifle is the M14, because I believe a military gun should have character, nostalgia and mystique as well as accuracy. I don't care if the AR is more accurate and versatile, I am an old fart and I am just fine with old school guns! (But in the real world, the M1 and M14 are pretty much as obsolete as I am). 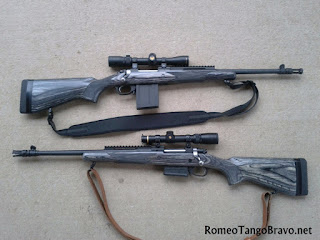 The scout rifle concept was first forwarded by Jeff Cooper over 20
years ago. It's a noble effort at the 'Do It All' concept
but going to be overkill for varmints in the more manly calibres.

When I was a kid the 'ultralight rifle' became the rage for sheep and goat hunters in the mountains - and for old farts not wanting to lug around heavy rifles all day. That fad morphed into the 'Scout Rifle' fad and was started by my hero - Col. Jeff Cooper aka The Underground Grammarian. The man had little use for extraneous speech and absolutely none for extraneous farkles on his scout guns. If it was not pertinent to the gun's mission as he defined it - it went out the window. He ended up with a super-lite rifle that was fast enough, accurate enough, and versatile enough to meet the vast majority of the shooter's everyday needs. I never built one because I stumbled on my own version of the perfect 'Do It All' gun: 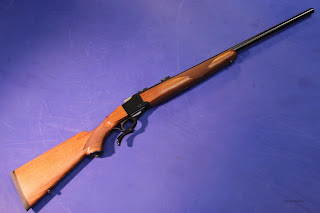 One day we were after antelope down by Hannah and the boys had tagged out but I just couldn't get a shot for love or money. The skittish animals just wouldn't let me get in range. We were on a ranch that was 11 square miles in size and BSing with the owner at the end of the day and Rotten Rob and Baloney Bob were laughing at my lack of success. Old Ward (the ranch owner) was drinking my whisky and laughing at me too. Assholes.

Anyhoo a gopher popped up about 75 yards away and the game was on. I had a snootful the same as they did and when I lined up on the gopher the bets were on and the cat calls and jeers started. I blocked them out, lined up, carefully squeezed the trigger....BOOOM!!!!

And must have missed the rodent by about a foot! But I DID scare the living shit out of every last gopher in that patch!

I ate chit for weeks after that because this rifle would shoot 1/2~3/4" groups all day long. With a 24" pipe it is only a smidge longer than a .30-30 lever gun. It's much heavier than the .30-30 but far, far more accurate. I shot crows and gophers with it and they just vapourized in a red mist when I did my part. Deer always went down like they were pole-axed - which is what the game is all about! When you shoot a gun like that - you don't need more than one shot! Ruger Inc owes me money - I sold more Ruger No.1's than your average gun counter guy! People would see that gun shoot and just had to have one for themselves. I dunno how many people tried to buy mine off me but I refused to sell. How many pounds of IMR4350 went down it's gullet? I lost count. All things must come to an end, and eventually my rifle started to spray its shots and the velocities fell off - I had burned out the throat on it. I gave it to Flapz' son and he just stashed it in the closet and pretty much forgot about it. I might yet buy another one - and if you are looking for a classic single shot that can do it all AND look good doing it - this may be the gun for you.

So the long story short is that any number of guns will now 'do it all'.