As everyone knows the petro-economy is in the toilet right now. So it goes for my province of Alberta in Canada. Federally our liberals are in power and they are doing exactly what you would expect liberals to do: spend like drunken sailors, tax like medieval robber barons, and obsess over queers, minorities and other divisive social issues. On the provincial level, my province is being run by the fuggin NDP - officially they're called the New Democrat Party but that's just a polite way of calling them scum sucking commie bastards. The party is made up of public school teachers, cocktail waitresses and sexually disturbed miscreants that want Alberta to be an ecological haven where retired snivel servants can spend their gold plated retirements fly fishing, and the roof top bee keepers and metrosexual cyclists can frolic on the taxpayer's dime. Anyone else will either work for the gov't or be on welfare.

Shit. Say it, don't spray it, Filthie! My computer screen is covered in gob and spittle - and I'm ranting again! Sorry everyone!

In any event the writing is on the wall. Stupid people want eeeeeeevil rich people to pay their way. Since the real rich people run the politicos and are untouchable here as they are in the states - it looks like the middle and upper - middle class are gonna take it in the hooper for all this socialist progression. And - like socialists everywhere, they are quietly setting up the legal machinery so that they can raid your bank account a la Cypress. I'm sorry, I don't want a financial haircut and I know where these guys are taking us. The 1930's beckon.

Anyhoo... I've just started buying metals for insurance purposes. I don't have nearly enough for a catastrophic currency melt down...but who knows in a few years? At the rate our politicians are going we will be down to bartering if they have their way. Those idiots think money grows on trees. 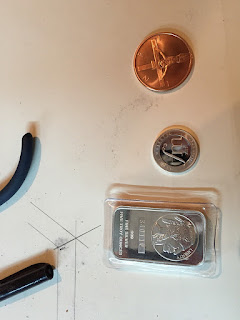 That's a five ounce ingot, a one ounce round and a copper coin.
What is it? A Sistercian? A denarius? A Rusbucknik? 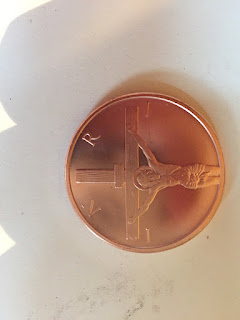 Is copper even worth anything these days? My wife is a recent Christian convert and I guess she just saw these and had to have them. If we do face a global currency meltdown...I dunno if these things are part of the prepping or not.

She will be happy with them I suppose.
Posted by Glen Filthie at 18:06