These Boots Were Made For Walkin...

Well the road trip's been pushed back a bit... Nothing serious, just a few loose ends to take care of. The wife has a horrible cold too. Hope to peel out tomorrow.

Footwear is on the agenda here at the hovel, and it's a subject that's been chapping my arse for years now. And it's getting worse!

Most of our footwear comes from friggin China or Taiwan or some other 3rd world dump and it shows - but not always. There's a time and a place for Crocs and you can tell just by looking at them that they're cheap and disposable. But some of the other stuff looks legit. I almost got scammed when I was ordering a Canada Goose parka and it turned out the company was a Chinese knock-off. One may snort in disgust at my obvious lack of intellect, saying that the alarm bells should have gone off when I saw a $1200.00 parka going for $800.00. But - in my defense, I have seen 'hot' brands do this before. Sun Ice used to be top of the shelf winter wear - and then they went out of style and their prices went waaaaaay down. Are they even still in business?

In any event, I am changing my buying habits. I'm sick of this crap - ya pay $250.00+ for a pair of boots, they look like hell in a year and they're garbage in two. I want a good boot. A pair that when it wears out, ya go down to the shoemaker and get them re-soled and you're off to the races again. 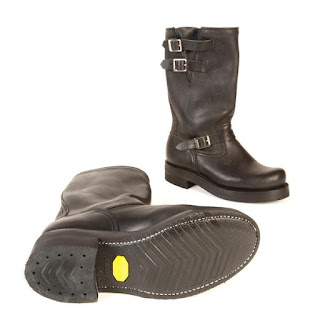 These are hand made by Dayton out of Hongcouver (prolly by chinamen) but they have been getting some rave reviews for durability and comfort. I like the shit-kicker look so I went with these for the motorcycle. They're in the lineup now so I should see them in October or December at the latest. Hopefully my 5.11 desert boots will hold together until then... or I may be making sales calls in my Crocs.

I've heard that if you are caught wearing Crocs by the cool kids, all acts of assault and battery become instantly legally justified. I would imagine there's a provision for age in there though, right? Like - if you're an old fart, you can still wear them? Like it does for Velcro shoes...?
Posted by Glen Filthie at 05:24