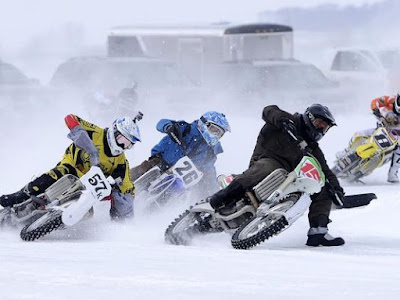 Up here in Alberta there used to be triathalon motorsport race called the 'Numb Bum' with proceeds raised going to various charities. If I recall it was a relay event, that required a team of three individuals riding three different machines: the quad or ATV, the ice racer motorcycle and the snowmobile. If memory serves it took around four hours to complete.

It is one of my life's biggest unfulfilled desires that I never got to compete in it. I had a quad, Flapz had the snowmobile - but we couldn't find anyone crazy enough to race the ice motorcycle. Those tires have wicked spikes on them and if you wipe out - the guys behind you will run over you and turn you into a waffle.

Perhaps if we modded BW's scoot we could form a viable team...? I personally think the idea has merit!
Posted by Glen Filthie at 04:39