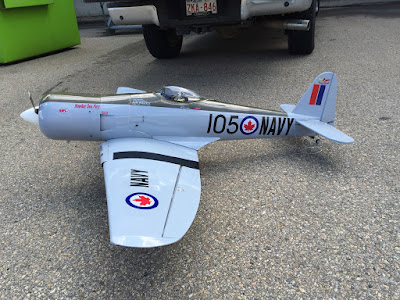 My name is Glen Filthie. I am an aviation whore.

The Hawker Sea Fury didn't get off the assembly line in time for WW2 and by the time it did - the writing was on the wall for propeller driven aircraft. The Americans couldn't be bothered with it because they had a bushel of better aircraft made right in the USA with their Mustangs and Corsairs, but the Sea Fury was just right for second stringer not-so-super-powers like Canada and Australia - who placed orders the second it went on the market. 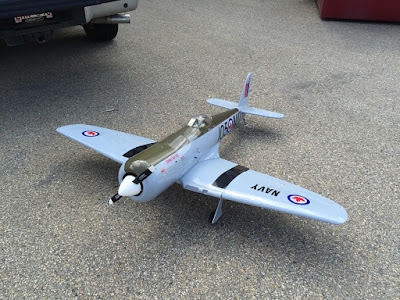 I need a four bladed prop for that beast for display purposes - but
the two blader will work just fine for flying.


A lot of people think that war birds are aerobats (or at least, I used to). They're not - in fact, compared to an air show aerobat - these planes are pigs in the air! It makes sense when ya think about it: they are loaded to the gills with ordnance and all their systems have to be armoured. A lot of people take specs too seriously too - if ya go over to War Bird Alley they will list range, top speeds, max altitude and all that crap - and the Hawker looks pretty unremarkable in that light - but the pilots of the day loved it. It was supposedly agile as hell, and Peter (Hoagy) Carmichael even shot down a jet powered MiG 15 with one.

The model was up as being old but never run. Well - once I bought it and got it down from the rafters I see a pile of stuff I don't like. The prop is chewed and has obviously been run, the charging port was set up by a hair lipped retard, there are some minor scuffs on the finish, and I just may re-motor it on general principles.

For now, into the line up she goes! And - before anyone says it - no, I am NOT out of control! In fact, I am going to buy one more: Flapz has a gas powered DeHavilland Tiger Moth biplane with my name on it and I am damned well going to have it! THEN - I will shut 'er down and stop buying planes.