We're making bread and having Mom and Pop over.

When we were kids and first bought the house we couldn't afford anything. I was in debt for $119K, I think the wife and I together made just under $40K and that fuggin mortgage kept me awake at nights. I abhor debt the way cats hate water!

On Sundays we got up early and made bread and then maybe played board games afterward. We couldn't afford entertainment and sometimes paying all the bills on time was a challenge. Any spare money went into the house and I thought I would always be a mortgage slave for the rest of my life. But they were good times.

Years later we got a bread making machine but I have this notion that totally hand made bread is better than the machine made bread. I don't know if the wife will choose to make loaves or buns but I suppose we'll find out shortly! The bread dough is rising.

Bah. Honesty intrudes: part of the reason I am making bread is because Mort The Dawg stinks to high heaven! He gets that pissy smell that farm dogs get sometimes so last night I collared him and dragged him into the tub. He didn't put up much of a fight - even by his deplorable standards he stunk like a skunk! We had our bi-monthly bath together (you get a srubbing too when ya bathe a mutt like Mort!) - and today we both smell fresh as daisies! Mort's fur looks 100 times better too. I'm hoping the smell of baking bread will over-ride the ghastly miasma that Mort has stunk up the house with.

Once Mom and Pop escape I think we'll scrub the mank and stink out of the castle - at least for awhile. Bleach! I need 100 gallons of bleach!!!!


Mort sucked right up to Pop and passed the stink-test today. Or, at least - he was less smelly than Dad was! HAR HAR HAR!!! By tomorrow we will both be rank and stinking again as per usual... but today we passed for clean respectable citizens - for a very short while. The bread got burned a little but was still sooooooo good. For now, all is well with the world. 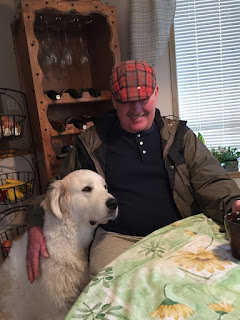