Captain Sweatpants To The Rescue

Oh jeez. Watch it out there, you guys.

This morning we're getting freezing rain. When we went out for Dawg Patrol this morning, Macey went down on her face and then down the stairs. Mort and I almost went too! I dragged them back into the house and put on my industrial traction gizmos. I've been trying to get a working version of these for years. I spent big money on it too; I got hosed for 50 bucks years ago when they first came out at Mountain Equipment Coop. They were called 'Yak Traks' or some goddamned thing and they didn't work worth a darn. I twisted an ankle several times on the first walk and threw them in the garbage in fury. I should have taken them back and flogged the salesgirl with them! I was better off taking my chances on the glazed ice than with those things. My dad had much the same experience so he cheated: he bought some nice winter boots with formidable grips - and then drilled some small hex head wood screws into them to act as ice studs. He still motors around with them today even after knee surgery and his dog can barely keep up with him. 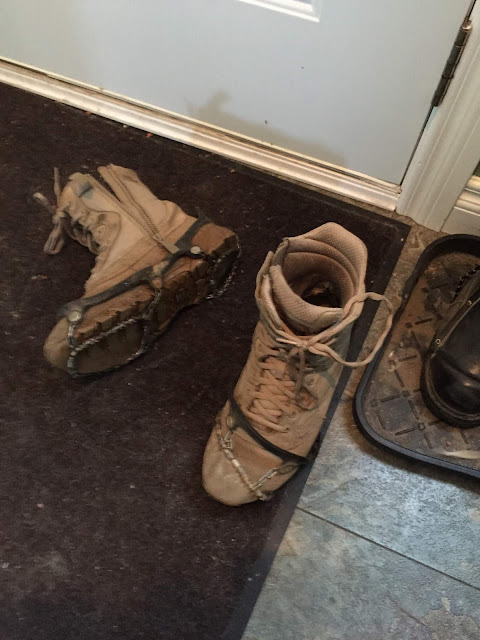 I dunno who makes these. I stole them from one of my customers. He specifically asked
for them back and I told him I would be happy to pay for them, but
one way or another, they were leaving with me.
He just shrugged and told me to get stuffed and get lost.  :)
A thousand blessing on young, compassionate Project Managers.


These even work on my sand boots that I ordinarily wear in the summer. (Yeah, those boots have had it and it's definitely time to pitch them, but I just can't bring myself to do it yet. Those are 'Original SWATS' from 5.11 Tactical and they are the best light boots you can ask for. They are too light for serious duty but just perfect for the fat old fart that likes the tactical look in footwear). The traction aids work like a hot damn on work boots and heavy winter boots and even worked on my tired out summer boots.

So we went out on patrol, got just around the corner when I spied a pretty young teen coming the other way. She works at the Sobey's behind my place and she was late for work and moving fast - on those trendy sexy heeled boots the youngsters wear. She just got past us, and - WHOOSH! Her feet went out from under her, and she fell flat on her back and I heard her head thunk on the cement - and she just laid there.

With the speed of a super hero I was at her side and was going to ask if I could be of assistance - but my fuggin dogs got there first! The poor girl - Macey have her a Wet Willy with a dog nose to the ear. Mort pushed her aside to drool and beg for attention. A stooge fight ensued where I tried to keep the damned dogs from spoiling my chivalrous rescue - but by then the young damsel recovered her wits, thanked us for our concern and shooed us on our way. I'm just glad she was alright - she gave me a bit of a fright when she went down like that. I'm still mad at the dogs. They made us look like assholes rather than crime-fighting superheroes.

Later on coming back, BW came around the corner at 90 MPH on his scooter and wiped out. He went over the handle bars and slammed into a parked van and started bleeding out all over the place!
I told that pussy to walk it off and smarten up! We can't curl in the street if our skip croaks himself in foolish horseplay! That kid needs a stern lecture on responsibility and team obligations.

The rest of you - take care on that ice. We'll need our best players to beat CM and Charlie at the Coopville Street Bonspiel next month.  They've got some star rookies in the hen house that have me worried. If we get past them - we'll be in a great position to take on Uncle Bob's Retards in the Tournament Of Farts in March!

Go slow, and keep your stick AND your feet on the ice.
Posted by Glen Filthie at 09:11