Courtesy And Manners In The Midst Of Donut RAGE

If you want to see Canadians go completely bat-shit, murderously insane, the best place to do it is at any Tim Hortons burp-n-slurp coffee shop. British Soccer Hooligans? Pbbfbfbfffftttt! Pussies! 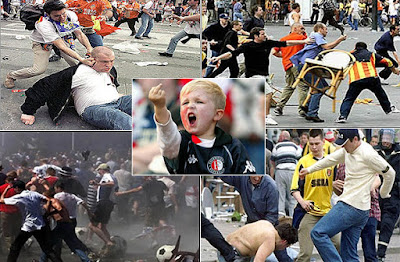 If you kippered pansies tried to pull that shit
at the front of the line up at Tim Hortons, you wouldn't go to
the hospital, you would go to the MORGUE!
You're all pussies - and so are all the fags that play for
Manchester United! HAR HAR HAR!

The elements that make for this social TNT at Tims are simple: elderly old geezers that have all the time in the world and think everyone else does too, and stressed out yuppy assholes that think the world revolves around them and their self-induced pressure cooker problems...and lots of caffeine. Pop got his pristine, pride and joy Ford F150 smacked up in the parking lot of Tim's when he didn't move fast enough for a hockey mom in a minvan full of young chimpanzees.

I dunno why I go to Tim's, I used to sneer in disgust at the morons that lined up by the dozens for that swill and fought and raged themselves ragged in the parking lot. I've always prided myself on being able to drink whatever's in the jerry can... but for some reason I line up with the brainless sheep at Tim Hortons now too.

And - because I'm an old fart (and don't give a shit about work) - I got all the time in the world. Last week I was in line at the double drive thru and we both placed our orders almost simultaneously, and proceeded to the pay window at the same time. I hit the brakes, looked over and saw an angry woman with her mouth going 100 MPH so I smiled and waved her through. I savoured a look in the rear view because the guy behind me started to rage because I let her in! HAR HAR HAR! It's a beautiful day in the neighbourhood...! Ladies first, dontchya know! Hey, pal - same to you!!!! ASSHOLE!!!

So I got up to the window - and I'll be damned: the coffee was free, the lady up front had paid for my XL Black. Was I in Tim Hortons? Or had I been magically deported to a British Finals soccer game? I just shrugged. Damnedest thing I ever saw. Then the same thing happened again yesterday. Where is all this damned courtesy and civility coming from? Two free coffees? In two weeks?

If this keeps up I may just have to apologize to the Brits, to soccer fans, and maybe even the fags that play for Manchester United... 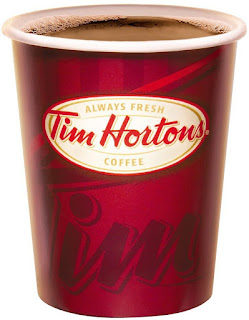 Don't drink this shit. It's not good for you.