Here at Uncle Bob's School For Retarded & Wayward Boys we're all hard at work preparing for Halloween. For Arts N' Crafts, Principal Bob gave us a nice assortment of machetes, dirks, bowies and stilletos and told us to have a go at carving punkins. The winner would get a cookie with his Ritalin during Afternoon Nap Time.

I dived right into it, I like edged weapons and cutting things. 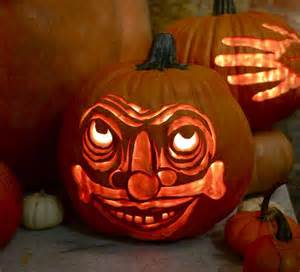 It's a Jiggy Lantern, I said. I was told
I was a racist POS and had to stay late and re-do
the art assignment. 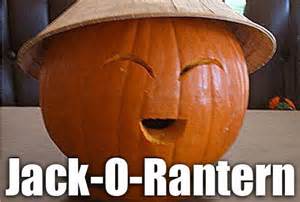 Looks like one to me - but Mrs. Chubster got offended and
Quartermain got sent to the corner for a time out.
We aren't allowed to play together anymore.
For the record HE is the bad influence on ME, not the
other way around.

WL did this one and made himself sick just by
looking at it. He threw up and got sent
to the infirmary... 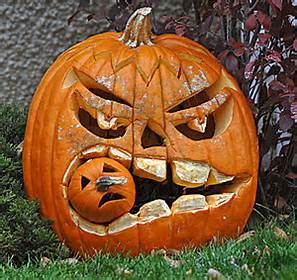 A guest student, the Lonely Libertarian made this one and the
entire class wet its pants in fright!
Uncle Bob doesn't allow psychotic girls in our school anymore.
(Mrs. Chubster is preparing a lawsuit). 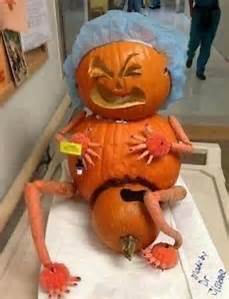 Wirecutter did this abstract celebrating the
joy and beauty of the birth process.
Mr. Buttblaster gave him a bare bummer on the spot and he cried like a baby. I don't get it
he usually smiles when he gets a BB from the lady teachers... 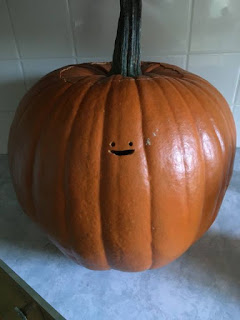 BW saved the day and got first prize. He got the cookie and
now we all hate his guts.
It's friggin RETARD school, morons!!! We should ALL get a prize...oh,
you can bet I will give Uncle Bob an earful
for this blatant attack on our self esteem.

BW doesn't know it yet but he's going to get beaten up by the monkey bars after school. That's assuming Uncle Bob doesn't triple up on the Ritalin like he usually does for our class. There is no justice. They always triple up on the creepy medicines but never the friggin cookies.