I Can See Why People Throw Out Their Faith...

...and I can understand it and sympathize a bit. People get hurt, or pushed past their point of endurance, or are forced to carry loads they cannot bear... or they just don't feel the faith the way others do. That's all legit.

But there is NO excuse to throw out your morals and ethics. A lot of people that do that think they aren't hurting anyone but themselves. Let me assure you, as somebody who's been there - if you hurt yourself, your family will hurt with you. Consider also that if you throw morals and ethics to the winds, others will too - they will have to, just to protect themselves from you.

People bristle and balk at the idea of 'I am my brother's keeper' and I get that too. But is it too much to ask that you at least take care of yourself? There may be no nobility in having to lean on someone else - but what happens if they need to lean on you?

I'm not a religious man yet, but it was Canukistani Thanksgiving up here over the weekend. I thanked my Maker for my parents and most especially my wife. I said a prayer for my daughter and my in laws when I was out with the dogs so I don't know if it counts or not.

Previously I've said I regard fall and winter as the end of the year but yesterday morning, on that bridge in the park where we always stop so I can crick my back out and the dogs lie down to wait for me and soak up a morning outside... in the peace and quiet of the park it felt like the beginning of something. 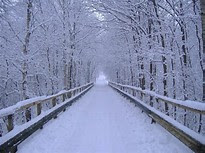 I certainly hope so.
Posted by Glen Filthie at 06:21