On what is probably supposed to be the last cut of the year - my Lawn Boy mower croaked. I was so goddamned mad I nearly packed it off to the friggin rod n' gun club to blast that no-good sonofabitch into pieces! It was only five years old and already the wretched thing looked like shit and ran worse. In a righteous fury, I stormed into the home n' garden shop and their trained psychiatrists came to the rescue!

First I went over and looked at the quads and skidoos and soon my blood pressure started to come down. One of the kids came over and bantered about the machines and asked what I was REALLY there for. Being a douche bag sales guy myself - I could see the kid was as perceptive as I was so I poured out my heart, regressed to my childhood, and then we went over to the Toro display for some deep psychological therapy. 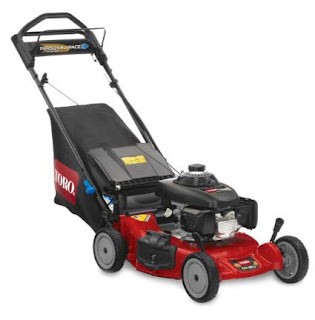 It has a fitting on the deck ya run your garden hose too. Turn on the water, fire it up - and the mower supposedly cleans itself. The wheels all the way around have honest to God grease nipples - this beast is made to be maintained and is not a throw-away like that &*#$@ing LawnBoy POS! It can also stay running when you hit a land mine and have to stop to pick up the dog chit. It's self propelled and has an electric start. (Pop was incensed when he heard about that! HAR HAR HAR!). Pop runs one of these in a lower grade without some of the bells and farkles. I paid the this psychotherapy bill with a sigh and a smile of relief.

But I was still emotionally troubled a bit. When Pop does his chores he does it with style. He has an electric pressure washer and when he finishes up he washes his mower down and wipes it off with a rag. Not even the fire dept. maintains their equipment the way Dad does. So as I'm heading out I spy in the corner one of these: 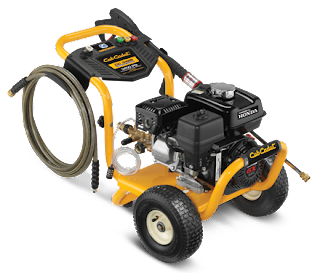 "Meet the new Cub Cadet, Mr. Filthie - I use mine to shoot troublesome crows
and magpies..."


SOLD! With this one ya get 3200 PSI and a selection of nozzles that will give ya a nice gentle spray for washing the bike and the cars - to a high pressure thin jet you can cut metal with! When the kid said he could pick off the crows with it I had to have it. I had visions of hosing down my next door neighbour and his dogs just to be a jerk! HAR HAR HAR! I might even go after BW and PP with it too! If they get pissy I will just scrub their cars down and earn some forgiveness and get off with a light beating rather than the usual justified homicide.