There are times I think I was born in the wrong decade. It used to be that men HAD to wear shirts and vests and overcoats with lots of pockets to carry all the junk that a man was expected to have in the course of a day. You needed a metal case for your cigarettes or cigars - and a trimmer if ya smoked stogies - you needed a good pocket watch to keep you on time with at least a pen knife on the fob. If you were into jokes and party novelties ya might have a .25 cal pocket pistol that you might shoot in the back alley or out the back door as you laugh and joke with your friends after work. 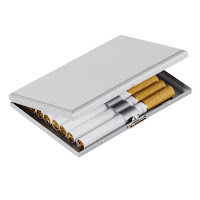 It had to be metal. Working bums like us could smoke deformed cigarettes that
got munched in your pocket in the course of the day's work -
but that wouldn't do for gentlemen. 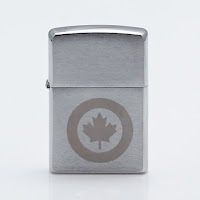 I can still hear that distinctive "click-chink!" as Pop
and his buddies lit up with these Zippos.
There was some trick to it, they would just give it
a flick of the wrist and they were on fire! For me, I was a
retard and had to open the lid and flick the flint wheel in two distinct
operations. Prolly still have one
around here somewhere... 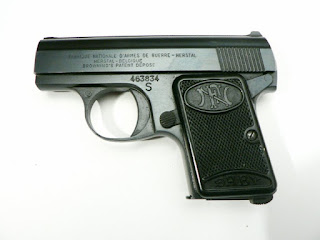 I dunno why I want one of these except as maybe a novelty to play with.
A gentleman is never unarmed but in some instances discretion is called for and
the Big Iron would appear unseemly. 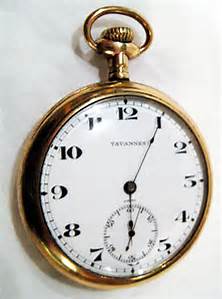 Grandad had two pocket watches. One was a 24kt. gold family heirloom
that disappeared when Grandma passed.
The other was a working beater and a utility time piece as far as he was concerned.
I have it and looked it up on the internet. It was made in 1910 and has no real
value... but it's worth the world to me. I suppose I should start
thinking about passing it on to one of the nephews.


I quit smoking on April Fool's Day in 2009. But there are times I would really love to sit by the fire place and light one up with a burning splint. But I know how it goes: one cigarette is too many, and one is never enough! I have no need of Zippos, cigarette cases and such.

Of course one of the few old school accouterments I can have is a flask! Several years back we were all doing leather work and I pretty much sucked at it. I managed to make a good holster for my .44 percussion revolver and a knife sheath but beyond that - I had absolutely no talent for it.

But fuggin Flapz did and I was green with envy. Cripes, he made a holster for his 44 magnum and a belt for the cartridges and he coulda gunned down Matt Dillon AND Cullen Bohannon with a rig like that! Shoot, he made anything he wanted and he always did a bang-up job of it. He used his talents to make gifts and his stuff was eagerly sought and highly prized by the recipients. He went down to the liquor store one day and bought a cheapo metal liquor flask - and then put a distinctive leather wrap on it with a skull concho. I was delighted when he gave it to me. 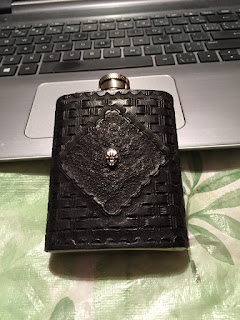 It's very small and maybe holds about 4 ounces tops. That's enough for a night by the campfire or to take the chill off during a long afternoon in the back country on the quad. Better is to make it two medium sized drinks for a couple friends well met in the hunting field. 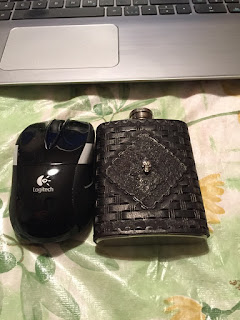 It's not that big. Flapz tooled the leather and fitted it to a cheap
two dollar flask and thought nothing of it.
To me it is a highly prized gift that is proudly on display in my liquor
cabinet. It's the perfect size for the social drinker.

Once in awhile I would take it to the range and after a dismal shoot me and perhaps the range officer or one of the other old farts would have a discrete dram in the club house. The standing joke was that I should have started drinking before the shoot to improve my marksmanship. To this day I wonder why it is I poured good liquor into old assholes like that, HAR HAR HAR! I need to get out to the range again...

I lost the flask a couple years back on a winter camp trip into the foot hills and I was just heart broken. When it was time to leave I was frantically tearing the camp and gear apart to look for it - but to no avail. I was heart broken to lose it.

The other day I was downstairs in The Dungeon going through my plunder and - there it was, nestled under some gear in one of those giant Tupperware storage boxes. I had forgotten all about it and had written it off - and all those years... it was right here. There was still a dribble of Tomatin in it... and I dunno what's wrong with my head... but I drank it! Tomatin is shitty scotch at best but it was still as good as a drink of Tomatin is ever going to get. Then I thoroughly washed it out - ya never know what kind a bugs were floating around in it after all that time, right?

I'm sitting here looking at it - and the crappy fall weather coming in... and I'm thinking an ice fishing trip might be in order this year along with a couple oz. of Cardhu.

Maybe I should take it to church with me tomorrow? One of the men there is bigger than a sasquatch and I can just imagine that guy getting one hand on my collar, the other on my belt - and getting the Bum's Rush out the door! Then I would get it again after the wife got home.

Maybe that isn't a good idea. But I definitely WILL take it to Retard School - one of these days!  :)
Posted by Glen Filthie at 19:57