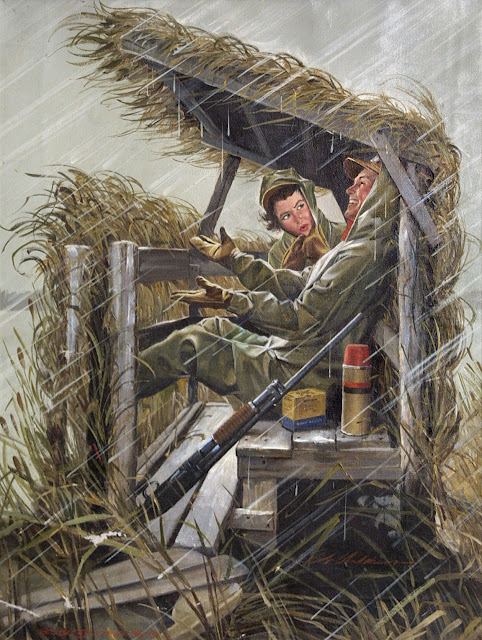 
Here at Uncle Bob's School For Retards And Wayward Boys we are all just cranked for the weekend! Unca Bob is firing up the short bus and loading it with guns and ammunition, and then tomorrow we're all headed out to shoot geese at Coopville at the crack of dawn! BW and WC are filling the flasks with scotch and cutting it with lighter fluid. WL is looking down the barrel and inspecting the bore of Quartermain's 12 bore as he jacks shells into it - and I am trying to figure out how in hell to get these 10 guage shotshells into my 20 guage side by each. I've tried to pound them into the chambers with a rubber mallet but they just won't go - so maybe I need a bigger hammer? Whatever - I will sort it out! Tomorrow: If it flies - it dies!!!!

When I was a kid I lived for duck season. My gun was Pop's old Cooey 12 bore single shot with a full choke. I love it and still have it. I could never afford factory shells so I stuffed my own and the quality of my reloads was spotty at best. Some went off with a comical "POIT!" and others sounded like crack of doom and developed enough horse power to kill on both ends. Watch it when you reload for scatter guns! You can screw around with powders and charges with rifles; but with pistols and shotties - MAX MEANS MAX. People blew themselves up and hurt themselves doing what I did. We didn't have YouTube in those days.

A lot of things were different in those days. As kids we were unwelcome at the rod n' gun club because that is where our fathers and grandfathers went to escape the family and kids. Today us old farts will fall over ourselves to welcome kids to the sport. Far too many are growing up thinking of shooting as something icky and gross. The shooting sports are healthy and wholesome, contrary to the liberal faggotry - and they will be the first to admit it if you can just get those pig ignorant assholes out to shoot a round of trap. It's worth it - just to see the shock and delight on their faces when they start to connect. It makes a lot of them question other aspects of their liberal dogma too - and that is always a good thing.

Geese around here were few and far between in the early 80's. Today we have jillions of them - there are so many of them that they are out-breeding the capacity of their habitats. Farmers are begging responsible hunters to come in and thin 'em out a bit! I never thought I would see the day. Other wildlife showed up since then too. I was stunned a couple years back when I actually saw pelicans up here. Then Bald Eagles. Really - Uncle Sam's Bald Eagles. Everyone said I was stupid or drunk when I talked about it - until they started seeing them themselves. I wanted to bitch slap my father in law when he started yapping about how Warble Gloaming was changing migration patterns. Mind you - now that I think of it - I haven't seen any of them in a long time now. Holy shit - is the earth cooling and changing the migratory waterfowl patterns?!?!? Everybody panic!!!! Somebody alert Uncle Bob!!! HAR HAR HAR!!!

I don't go after ducks and geese anymore - I just can't be bothered. When you start getting old or middle aged your priorities change and I was shocked when one year - I just didn't want to do it anymore. Dragging out the decoys, cleaning and plucking - the inevitable hangovers the next day....PHOOEY!

It's time for younger hunters to take to the field and I wish them (and you, if you're so inclinded), all the luck in the world. Fill your bag limits and make memories.
Posted by Glen Filthie at 04:42