No, I am not picking on Unca Bob again. I am thinking today of Baloney Bob - possibly the only marksman better than Yours Truly in the world! :)

Light years ago I used to look forward to weekends the way only young people can. This time of year that meant hunting trips, camp fires, cigars and BOOZE - oh gawd, lots of BOOZE!

My wife and I had turned a corner of sorts at that time in our lives. Like many couples when we were young we were so poor we didn't have a pot to piss in or a window to throw it out of. But now we were both working, we had our own home and I could even afford a decent hunting rifle and the odd trip out! Having a good rifle and putting it to good use brought me to the attention of Baloney Bob at one of the gun tournaments and we discovered a few things in common: we both liked hunting, we were both shithouse marksmen, and we were both drunks!

We used to go out deep into Alberta's 'koobasaw country' that was settled by ukranians, Lithuanians, Estonians and other bohunks and rubber begonias back at the turn of the last century. These are the people that were Bob's ancestors. On a trip long ago we stopped at a grave yard, where Bob got out and showed me the graves of his grandparents. The grave yard and church grounds were immaculate even back then and the church looked much like this one that I found during a trip out to Bonnyville today. 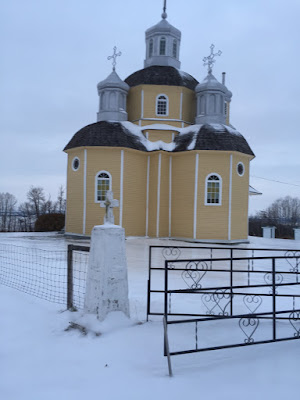 These immaculate little churches are all over the place
in koobasaw country. 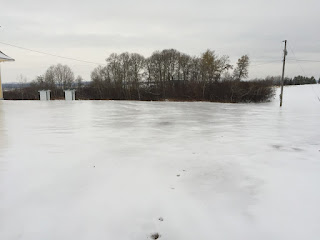 I didn't go in; although it looks like a skating rink
the icy crust was very thin.
It's treacherous stuff to walk on.

His family had a summer cottage nearby and we piled up there for the night to sit around the campfire, sink a few pints and plan the next day. Bob must have gotten into some green beer or something because he spent the entire night barfing and retching and keeping us awake.

The next morning I shot a young spike buck right out of the gate and I was pleased as punch. The weather got hot so we dipped into a tiny but busy village called Duvernay and went into the pub to stick our noses into some glasses. I struck up a conversation with some of Bob's relatives and the boys got antsy and wanted to go hunting - but I was enjoying the company so we parted ways for the afternoon. I sat in that pub with some elderly gents and bought a few rounds, ate a couple metric tonnes of perogies from the restaurant and the day flew by without me or the fellas noticing. Bob and Skinbag came back shortly after supper to show me another deer they had taken and pick me up. 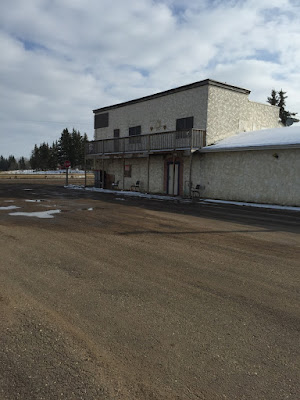 Duverny is pretty much dead today.


16 years later I passed back the same way on the road home from sales calls and thought I might stop in at Duvernay for a bite. There's only ghosts and echoes here now. 16 years ago the town was all tiny, neat old homes owned by local retired farmers and gassy but friendly elderly stub-farts. A little black kitten came out to see me but the place is pretty much an empty, forlorn dump now.

I sat in the middle of that time warp and just shook my head. It's like I'm growing up all over again. I remember as a boy hitting my teen years and looking on in befuddlement at the toys of my childhood and wondering just what in hell it was I found so wonderful about them. (I remember looking on in befuddlement at the girls the same way and wondering why I was obsessed with them).Today I'm doing the same with all my hunting guns. The thought of getting up early and going out to drop the hammer on a deer or a moose just leaves me cold and bored. There was a time me and my friends LIVED for it. And this town - the old farmers are all gone... and nobody has moved in to take over. Of course I knew the family farm was a thing of the past long ago...but now even the traces of that era are blowing away as if they never were. I'm glad I got to see some of it before it was all gone.

Today Baloney Bob must be retired. Last time I saw him he looked like a villain of James Bond's - he had had some eye surgery that left him blind in one eye, he had gotten soused one day and took a finger off on a table saw - and he was having problems with booze. But I remember him when he was a big, ropey farm kid with a big smile and bright eyes that handle himself and the game when it was on the ground.

I spent most of the day driving and thinking and remembering old days with old friends. I know you can never go home - but it would be nice if ya could at least stop by an old watering hole for old time's sake.
Posted by Glen Filthie at 16:09