Saturday Morning Bacon: It Ain't Your Imagination You Old Fart

When I was a kid growing up in the 70's there were still a few depression-era teachers knocking about. By the time I ran into them they were all pretty much in the home stretch before being let out to the retirement pastures. I had the fortune (and misfortune) to run into two of them before they were all gone forever.

One thing that constantly amazed me was how disgusted they were with us kids and our parents. One of the lady teachers went to great pains to try and hide it, the other was right in your face with it and didn't give a damn what you or anyone else might think of it. Paraphrased, Old Lady Halat (Or Old Lady Halibut, as we called the old bitch): today's kids are lazy, rude, and utterly screwed and their parents should be flogged. What in hell were these people thinking letting their kids do the things they do, while their parents did what they did? Our society was falling apart is the seams!

I will never forget one incident that set the old bitch off like a volcano: some high school kids had had a bush party at one of the roadside campgrounds a couple miles out of town. They had a big bonfire that got out of control and burned down the cookhouse. Some intellect thought it would be the height of humour to burn down the outhouses. When the cops showed up they got pelted with beer bottles. Happens all the time today... but this was big stuff back then and made the papers. More squad cars were called in. A paddy-wagon and the fire dept. were scrambled out of Edmonton. Kids went into remand by the dozen and were put up on public shit lists in the local community papers. The seniors were outraged as was our teacher and the old bat went off about it for days as if we were all personally responsible. Nobody had ever seen shit like this in my small town. Today people would have sneered at it called it derogatory names like "Mayberry". I suppose it was. For awhile.

As for Old Lady Halibut - she tried, I'll give the old bird that. She asked us as a class: why would we do something like that? It was a beautiful rural campground where little kids could play and families could be together. And it was all free! Why, when she was a kid they couldn't afford vacations or tents or trailers or any of that stuff. Us kids had it all! And we were pissing it away! What in hell was wrong with us?

I and a couple other stupid kids started to laugh at her rant. How should we know? We were in grade 5! Everyone knew ya didn't mess with The Big Kids or they would beat your ass! Sometimes seriously! How were we supposed to know what those animals were thinking? I said as much and I'll always remember the old bitch's reply: "Well, Smart Alec - in a couple YEARS you WILL be one of those animals at the rate you're going!" I just laughed - and the old harridan snapped and took a yard stick to me and beat my ass with it. Then she sent me down to the office where I got the third degree. A sympathetic vice principal made notes as he took my account - and let me go out to play early for recess. He was going to have a chat with Mrs. Halat!!! Years later I learned the teachers had the long knives out for Mrs. Halat. She was too tough on the kids, she was abusing her position to punish kids unfairly and she didn't have a place in a modern school where she refused to let go of old teaching techniques and methods. Why - most of us were failing math! How was that possible? (Somebody should have told those morons we were failing because we couldn't do it, and Halat wasn't about to cook the grades to pass us on). A couple months later we had a new teacher and had learned that Old Lady Halat had decided to retire early. We all heaved a sigh of relief and started getting good marks and having fun again.

And a couple years later, I was one of those animals that Old Lady Halat had bitched about. I never brought home the cops - but I never grew up either. I hit the job force as an irresponsible young man at the height of an economic recession - and the culture shock blew my doors off. In those days, sitting in Mom and Dad's basement playing video games was not an option. I grew up fast the hard way.

On the way home from dreary Ft. Mac yesterday I stopped by what was once a public road side campground. Years ago, back when they were everywhere, my father in law and I had stopped there coming back from a long fishin' trip. Happier times.  By the 80's the vast majority of these road side camp sites were gone. The parties got wilder. Drugs started happening. Kids got killed every year like clockwork. The ones that are left are really nothing more than rest stops - where some passing stubfart like BW or Yours truly can stop, yak on the cell, stretch the legs and take a break during long road trips. The cops watch them like hawks and still can't prevent the vandalism. 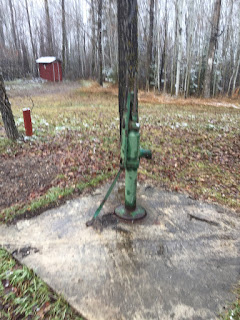 Look at this artifact through the eyes of a city kid.
Those trees would be full of deer, bears and adventure. Maybe
even mountain lions. :) Why can't
people respect stuff like this today? 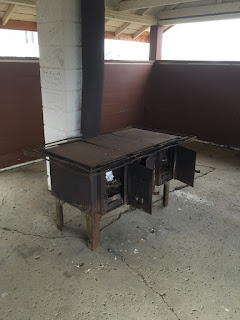 This cookhouse still survives.
Some idiot tried to burn garbage in the stove. The place was strewn
with garbage and the crappers - ugh! These pics are carefully taken
so as not to show all that. It wasn't easy. 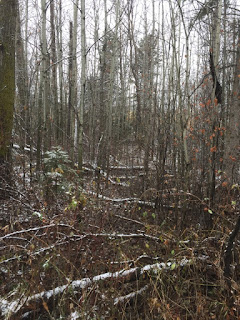 Reminds me of my hunting days...
My grandparents wouldn't think of defacing public property like this. Nor would my parents or even me. We were raised in better times and better people... like Old Lady Halibut, I suppose. I would just love to sit down at the picnic table and chat with that old woman today.
Maybe that wouldn't be a good idea. If she saw what was going on in our schools today I could see her going down with an M14 and mass shooting the teachers. She was one of the last educators that understood that a child's education is more important than his self esteem. She tried her best to make sure I knew it - but it was so easy for me to cop out and go along with the other lemmings. I am thankful now that I learned that there is a price to be paid for doing that. The wheels are coming off our society as we speak, and the kids today are even less prepared than I was when I was getting out of school.

What are we going to do now Mrs. Halat?
Posted by Glen Filthie at 08:09