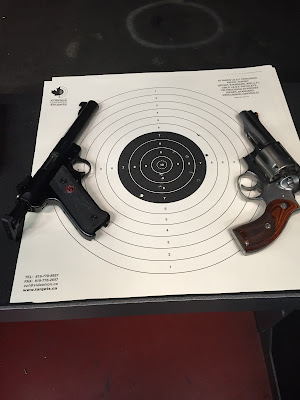 There's a rancid STINK at the indoor pistol club today. This morning the wife made half a pot of coffee before work. Then I went out to call on some customers and guzzled another two large cups. By the time I hit the fuggin range at lunch time I was vibrating at 97.3 Ghz!

That Ruger Mark III is the best .22 for the money today. There's maybe one or two others as good - but by no means better. These inexpensive little guns are tack drivers, right outta the box. Worse - mine has a few farkles and has been tuned a bit. Every shot SHOULD be in the 8 ring and most should be in the 9 and 10. That's assuming a shooter that hasn't fried the left side of his brain with caffeine.

That Ruger revolver is the latest addition to the gun safe and I love it. The .45 Colt is the BEST revolver cartridge out there with the possible exception of the sweet shooting .41 Magnum. That one will also keep all its shots in the 8 ring in the hands of a mature adult - which lets me out I suppose.

Usually I fire 40 rounds at a go. That's a lot, by my standards, I am a slow fire bullseye guy. I never got into the 'run n' gun' games. When I was a kid the cool guys all shot Metallic Silhouette with tack-driving precision guns. Those guys are pretty much long gone today - but I still remember watching a vid on Bill Blankenship where he was dumping 1 ft. metal gongs - at 200m! Holy Crap!!! If I recall he was shooting one of those new Colt Delta Elites in 10mm. Afterward he proclaimed that the gun he used was no better and no worse than any other Delta Elite of the assembly line. It was a super way to introduce a new gun to the market. Bill was a super guy too. He inspired me to take the pistol seriously and I became a competent shot in my youth. If I ate my Wheaties and went to the range on a good day I could (and did) put the boots to the local constabulary! Once the formalities were over the fun would start. One of those bungholes always came up with a game that made for some excellent sport and jokes. Example - one of the officers had shown up to shoot his qualifier on an off duty day and had his golf clubs in the back of his car. We raided his golf bag, and planted a golf ball on a tee about 40 yards out and commenced shooting at it. That's a super tough shot with service guns, monkeys and hecklers chimping out in the peanut gallery! Every Wednesday there was a golf ball shoot for the longest time.

I would like to blame my stinkmanship on the coffee. But... as I get older it seems to get windier down range, and iron sights get mighty fuzzy these days. The kids that run the pistol range have learned not to ask me questions like 'How's the shooting today?' They ignore me when I am sucking swamp water, and if I fluke off a good target they make a point of noticing and congratulating me. HAR HAR HAR! It's a novel experience being patronized by kids!

The hell of it is - the way I shoot these days, every little bit helps! For now, whenever I turn in a crappy target like that I sign WC's or BW's name on it before throwing it out. That way, if any garbage pickers should fish it out and start laughing - I will have plausible deniability!