The Anger And Resentment Are At A Rolling Boil

All the bigots, racists, deplorables, unsavouries and homophobes are spreading epidemic thought crime.

PP asks if the White Woman has woken up yet. Don't crap in the comments at 1:30 in the morning with an Ipad as I did. In my scholarly opinion, this is not a matter of consciousness. Or even conscience. I was raised in a matriarchal family. My mom was liberal all the way through and Pop considered her an equal - and made sure us boys did too. When I moved out my mother in law headed up the family and we had an uneasy peace. When we clashed I mostly deferred to her because conflicts like that hurt my wife and daughter - who loved my mother in law dearly. Unfortunately, the older she got, the sillier and less informed she became and she ignited a family feud that could only end one way. I've since put my own mother on notice too - her politics and opinions are hers and she will damned well keep them to herself in my presence or else. The discourse WILL be civil and courteous both ways or she will not be part of it. The women in my family are 'femocrats' as PP calls them because the older ones haven't had to face the fallout of it - and actually benefit from it - and the younger ones accept that fallout as facts of life. They will never associate the consequences of their beliefs with their actions and will always blame others for them. Needless to say they are scared spitless of Trump and are in the bag for Hillary.

All of the above goes out the window with my wife and most of her friends - many of whom are eeeevil, icky Christians. Those women are as smart, capable and resourceful as us guys - and wonder of wonders - they're happy, fun people to be around. They see Hillary for the rancid cnut she is (although they would never describe her in those terms). I suppose the long and short answer to PP is that no, most white women will not 'wake up' because they can't. The rest never went to sleep to begin with.

WC, Borepatch and even Pete (who hates intemperance) - are linking to Mike Bishop who extends a hearty Fuck You to the Usual Suspects. All I can say is "holy crap!". WC is so laid back that you have to go well out of your way to piss him off. Anything goes with that guy as long as nobody gets hurt and a good joke is in the works. Borepatch is a mild mannered shit house intellectual that hates all politicos on general principles. As for Pete - shoot... he's a clergyman and he has been in the soup a few times if I understand him correctly. When men like that come out against you - in a manner like this...? You really, really need to re-evaluate your moral compass and your actions. The ladies on my Toilet Roll are conspicuously silent on Hillary Clinton. I can't speak for them but if there were anything good about Hillary Clinton - those women would have said so, and I would have listened.

As usual, Uncle Bob shits the bed but gets part marks. Quartermain and the boys attempt to school him on mathematics in the comments, HAR HAR HAR! 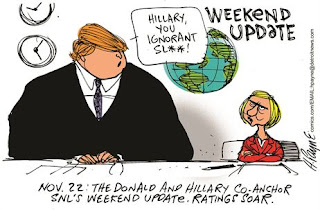 From my lofty intellectual perch up here in the peanut gallery in Canada, I can gaze down upon you peons and stinking masses and render judgement!


Trump will not save you or destroy you. Sure, he's obviously light years better than the piece of chit he's running against (sorry, ladies, but if Hillary wants fair and equal treatment for women, then chivalry has to go and I will describe her in the same terms I would for her husband) - but Trump can't fix what's WRONG with America. It's the same thing that's wrong with Canada too: this idea that we can go along, entitled to the good things in life that make it warm and fuzzy - and not have to pay for it. That we can foist the consequences of our poor decisions off on others. Example: our seniors are bankrupting the social programs they voted for themselves. Assuming the financials don't collapse (they will...but assume they won't for the sake of argument) - my great great grandchildren will be paying for their retirement today. Young men lounge in their parents' basements playing video games rather than working. Young women are affirmative-actioned into management positions they aren't qualified or prepared for - and turn the workplace into unproductive political minefields and soap operas. Married men and women are viewing their marriages as power struggles as opposed to mutually beneficial partnerships. Families that pay their bills and try to get ahead and provide a life for their own kids are having to pay for the kids whelped by morons that don't. Most kids can't afford homes and families anymore. Trump can't fix any of that - but Hill could sure as hell make all that stuff a helluva lot worse. And, if you're white and male, you know who is going to be expected to foot the bill for all that too!

Making our countries great again will involve making ourselves great first. Doing right by your nation is going to be remarkably easy at the voting booth, but doing right by yourself requires honesty and integrity and all those icky values leftists and liberals hate. They've bred those values out of four generations of Americans - and there will be consequences for that.

As usual, PP is right on the money. Yes, I'm prepping like mad and you should too.
Posted by Glen Filthie at 01:38