It is my scholarly conviction that using tools is a genetic trait hardwired into our beings at the genetic level. Not everyone will feel comfortable with a chainsaw, or a chain gun - but for some tools - EVERYONE is comfortable with them. Knives, for example - even your most liberal, shrieking liberal whore of a woman who hates guns and bayonets and icky fighting knives - will pause for thought when legislative bed wetters start yapping about knife bans. They were one of the first tools humans ever invented and they put us on top of the food chain eons ago. Chefs and housewives will fork out huge cash for good cooking knives. Outdoorsy types will too.

I dunno how I got over there but Brigid had found herself a wonderful little knife. 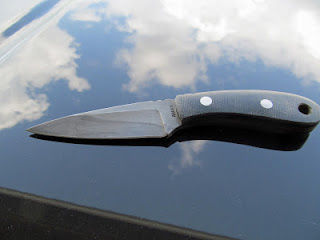 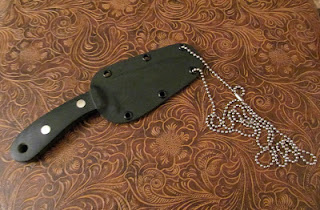 Hmpffff!!!! A charming, practical blade but only for the right people.
The only people having any business
with a neck knife are women, indians, and buckskinning black powder geeks.

Who came up with the concept of the neck knife? Who knows? It first became popular in more recent times with the squaws of the North American indian tribes. Hubby might kill the buffalo, but it was up to the women to skin it and butcher it. These little knives aren't little because they are for women - they are small and agile and that makes them the best tool for the job! They became popular with the early white mountain men that fled west to live free in the wild too. They made short work of game and rode comfortably on your person and were close to hand.

Too close, for my liking! For us guys, our knives belong on our belts or in our packs. Generally we won't need to get at them fast - so in my opinion anyways - I would rather keep mine away from my vitals if ya don't mind, HAR HAR HAR! Neck knives are all fun n' games till somebody slips on a banana peel, HAR HAR HAR! But for Brigid - that is a sensible, elegant little blade that will work just fine for her.

All true hunting knives aren't much bigger than Brigid's. They come in all kinds of blade and handle shapes. I had three preferred hunting blades over the course of my hunting 'career'. 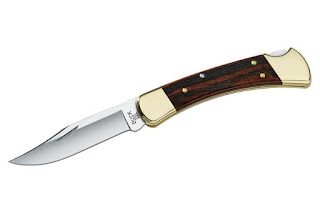 This is a Buck 110. Folders are sweet to carry, safe - and the steel
on mine could be stropped to an edge you could shave with.
They are handsome knives too.

I lost it 30 years ago when Big Jeff shot his first whitetail buck on Pop's farm. We field dressed the deer and the knife got lost in the snow. They're only 60~80 dollars, I could get one today if I wanted... but that one was special. Dad gave it to me as a teenager when he realized I would not be talked out of the shooting and hunting sports. When I discovered it's loss Jeff just shrugged. To him a blade is just a tool and nothing more. Maybe he's right. Jeff never took especially good care of his stuff. He just used it hard and repaired it or threw it away when it was time. 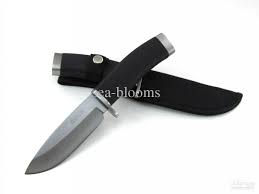 My second blade was a drop point fixed blade. I carried it for a couple years but didn't like it. There was nothing wrong with it - it just wasn't me, somehow. I gave it away to some acquaintance I shared a campfire with. An important lesson I learned is in order: it is really easy to spend WAY too much money on hunting knives. Not everyone needs a custom blade like Brigid's. Most of us will get by just fine with moderately priced, well made mass produced blades. In the real world you won't give up a thing to the custom makers. Custom blades are for people looking for something unique in their knife. Or maybe people that see it as an object of art to express their personality with. All that is valid and worth the money if your mind works that way. Mine sorta does, but not enough to shell out the cash.

My last - and best hunting knife

That's a Ken Onion lock back blade as marketed by Kershaw. Mine was like the lower one and was also my day-to-day pocket knife as well. Cripes, you could strip wires with it, cut bailing twines, and zip through a whitetail in 20 minutes flat! That blade worked damned hard for years until I retired and went to a Leatherman multitool. I wouldn't recommend the Leatherman for the hunting fields. Sometimes field dressing can get messy and ya don't want blood and guts getting into your Leatherman and making for rust.

Contrary to Hollywood, hunting knives are small, unobtrusive and sensible tools evolved for the same job we humans originally evolved for. If you have a new hunter in your family - any of these will make a fine start for him. Any one of them will last a life time, and they will continue to sit warmly in their hands once we have shuffled off this mortal coil. If you want to tell a hunter in your family that you love him - give him one of these or something like them.