Like my wife and I, to begin with Mom and Pop had no money and Dad got around by driving beaters and used cars. By the time I was born and old enough to think they had pretty much turned the corner and were making serious money. Pop was a journeyman mechanic. They had a 900 sq. ft. house - about a 100 sq ft. larger than Grandma and Grandpa's who were considered respectable upper class in the early 50's... but Pop kept driving used beaters.  He would fix them up and drive them and sell them and cycle through them. The old fart still does it today, but he drives much nicer used vehicles. He just bought an '08 Ford F150 that some fuggin kid had piped and he chugs around the town in it on low profile drag tires. I swear to gawd I am going to find a home for that retard one of these days, he is nothing but trouble!

Errrr... I'm ranting again, right? I love picking on Dad but I suppose that I should be glad that he can still do what he does at his age and if a pimped low rider truck keeps him young - I am glad of it. Pop and Big Bro get mad at me because I buy my vehicles brand new - and I drive them till the doors fall off! I usually give my cars away to kids or friends that might get a few thousand more miles out of them before they pack it in.

In any event I was but a squab when Pop was driving around in this car: 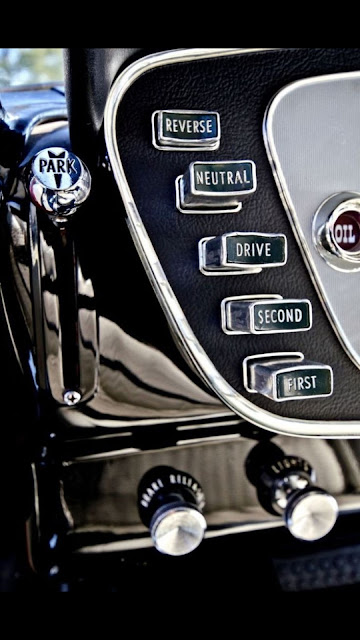 I think it was a Dodge. I can't remember, I was little more than a toddler... Some memories you have will get submerged and filed and forgotten about only to resurface years and decades later. When I saw this, I remember being a squirt and Pop would let me pretend to drive and I could push all the buttons. That was fun stuff for a toddler. I couldn't have been more than four or five. Today all the controls make sense. That's a futuristic, ultra modern push-button transmission!

A ton of other baggage came back too. 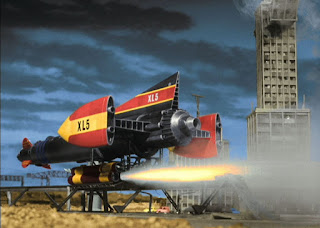 That's Fireball XL5 taking off from Space City. I had to learn to tell time as a tot so that I could manage to be home on time to watch it on TV. Back then we all wanted to live in the future with modern marvels and luxuries. I was going to have a jet pack, a lunar lander and a pad on the moon - we all were! I wish I still had other touch stones from that era of my youth: NASA had a full time PR department going full blast back then and fans could get glossy pics of the spacecraft and astronauts, mission profiles and patches and write ups and crap - and I had it all! It all got thrown out later but I will bet some of that junk would have been worth money to collectors today.

Today we all want to live in the past when life was simple. A faithfully restored car like that one above would prolly run six digits and go on the block at the Barrett Jackson or whatever it is. Harley Davidson's retro motorcycles sell like hotcakes. I actually saw some cool kids wearing plaid the other day. (Or maybe they're losers like me, who knows these days?)

It's sad, there's not a lot of people looking forward to the future like they used to be. In fact, it's looking pretty damn grim for a lot of folks. They're preparing for tough times and with damn good reason. We all should be. If nothing else, the coming election proves (without a shadow of a doubt) that something stupid this way comes. We're gonna deserve it too.

Kids today have no idea what's been stolen from them. Instead of watching astronauts hopping and skipping around on the moon - they're watching rioting negroes, protesting nutbars, and learning why Johnny has 3 daddies at school. Unca Bob says we have no rights of passage for our kids anymore and he's right about that. But we don't have any heroes for them anymore either - just phonies, tokens and fakes out of Hollywood - a community famous for producing the most immoral cretins and morons the nation can produce.

Yannow if I were in charge of Dodge, or GM or Ford - I would go full Retronaut. Dodge is reviving the 60's with their Chargers and Challengers, GM pulled their head out of their collective ass and finally reinvented the Camaro, and of course Ford has their Mustangs.

We need to reinvent cars from the 50's. I want fins. And chrome. Big mofo steering wheels. I don't want one single digital display - everything has to be analog - or at leas look analog. Sure, bring in EFI, ABS, airbags, seatbelts and all that stuff but hide it - we have so many cars built to impress...but none that charm. We need to look forward with optimism I suppose, and bring along much loved memories and icons in the same way with us.

If anyone recognizes that car in the pic - would ya please let me know?