I've been dreading it for months. Back in the summer I decided I wanted a watch that was built hell-for-stout, could do anything one might reasonably ask of a watch and not be so overly pricey that if Ya banged it or scratched it, it wouldn't break your heart. (No, I need a watch. I know nobody wears them anymore because they all got cell phones but that just doesn't cut it for me. Like Wirecutter, I loathe smart phones and the people addicted to them. I use mine sparingly and pretty much only for work). When I need to know the time I look at my wrist and get mildly irritated if I have to fish out a phone or look around for a clock.

I settled on the Casio G-Shock Mudmaster. It does atomic time, it's solar powered, does a million functions and doesn't look bad. Ya put it on and forget about it. Mine came from the factory running precisely two minutes fast and that suited me just fine. I have many flaws, but I AM punctual; if I say I am gonna be somewhere at a certain time you can set your watch AND warrant to it too. If I'm not there, it's because either Darwin, the devil or Murphy got me... and I will call ahead to let you know if possible. 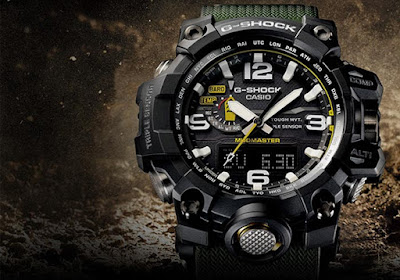 Anyhow, this cutting edge marvel of technology came with a crappy little manual that was two inches thick and had at least eight languages in it - one of which was Klingon. I pitched it in the garbage and figured that if I needed to screw with the watch I would just ask someone or figure it out myself. I was going to take out that two minute lead but got screwed - this was a fairly new watch at the time I bought it and Casio had no PDF manuals on line yet. Well chit! What was I gonna do in November when they set the clocks back?

Well - lucked out! They finally got the manuals up and now this beast is set! Setting the time isn't hard but ya gotta know which buttons to push first. Trust me, it is NOT intuitive.

I suppose I should save that PDF now that I think of it... AND back it up...