A lot of people are on the single malt scotch band wagon now. I dunno how I got on it. I think it was my father in law's doing. Back when we were civil and even friendly enemies we would go hunting and fishing and of course, spend the night round the campfire with whatever rotgut he bought. I didn't have the money to afford booze when we were young, so he would buy lighter fluid like Famous Grouse or Cutty Sark or some cheap blended shite that was fit for cleaning your rifle and that's about it. He drank it straight up, no mix - and so I did too and acquired a taste of sorts.


Years later I was buying the booze for the trips and I spied an ad/display featuring The Six Classic Malts Of Scotland - and I was lost. My father in law was too - we drank Cardhu. We guzzled Oban. We inhaled The Six Classic Malts and then started sampling other makes. Any occasion was a suitable occasion for a formal scotch tasting and the women would roll their eyes as we got schnockered and came up with frilly adjectives to describe the notes and flavours as we put on drunken airs of phony sophistication. I had so much fun I bought books on it and soon I could pick out and accurately describe the textures and finishes of most spirits. I got so good at it, that at a dinner party Baloney Bob pulled out his best bottle of wine - a red - and described how he loved the earthy bouquet. Of course, we were both half in the bag and I said "I don't think this is an earthy wine, Bob...". What a mistake!


It was hilarious. Bob is the kind of guy who likes to keep up with appearances. He perceives himself, semi-accurately, as a man of wealth and taste... so he pissily challenged me: "So, Filthie, you repulsive toad - would you care to critique my favourite wine and give me an expert's opinion...?" and the dinner guests chuckled and tittered at my expense. I didn't care...so I took my time, smelled it, made a show of swishing it around...."Oak," I said. "Definitly no earth....flowers...? Flowers for sure, can't tell ya which ones because unlike you, Bob, flowers aren't my thing..."


Bob looked like he was gonna tar his shorts. Glaring at me, he passed the bottle of Campofiorin to Rotten Rob who read from the label out loud. "On the nose, Campofiorin evokes notes of oak and flowers with a hint of elderberries..." HAR HAR HAR!!!! HAR HAR HAR!!! Bob was furious, grabbed the bottle away from Rob, re-read the label, and shook his head in utter disgust - and then everyone was laughing. Getting the best of a would-be snob is always good sport! Tasting scotch and wine is incredibly similar - the procedure is, anyways. I can't do it anymore because I don't drink like I used to.


In the 60's Hollywood was producing a new breed of secret agents for the silver screen. James Bond, Agent 007 was the most famous, and the character "had a thing" for single malt scotch. Previous to that, most scotch sold were blends. Many people mistakenly think that single malts are better than blends but that is patently false. There are blends that can blow the doors off the best single malts - or so I am told - and I would believe it. In any event, you can thank James Bond for single handedly kicking off the single malt craze.


I grew bored with the effeminate single-malt-sipping James Bond years ago. When he went emo and started working for a woman I wrote him off for good! I was absolutely delighted to replace him with younger talent - Agent Sterling Archer! 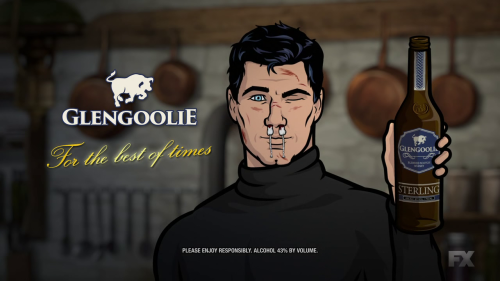 Like scotch - Archer is an acquired taste. I was delighted to discover that
this ultra-suave secret agent drinks blended scotch!

In a 007 flick, the climax comes when the atomic bomb is ticking down to the last second, and Bond makes the miraculous stunt and saves the day. Archer is the complete anti-thesis of Bond - disarming the bomb is the least of the action - the comedy and humour comes from the characters who are constantly fighting and squabbling amongst themselves. In one episode, Archer beats up the company  comptroller, steals a bottle of Glengoolie out of his desk, guzzles it - and throws up in an office trash can. It's stupid to talk about but hilarious as hell on the screen. 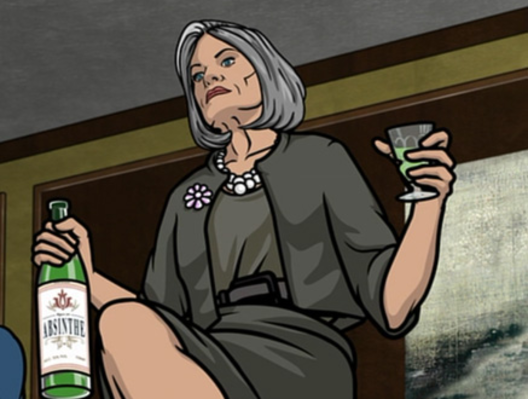 The abusive, alcoholic, rage-filled Mallory Archer. An inspriration
to single mothers everywhere.
Gotta love a woman that will shoot her own
son with a Ruger Redhawk 44 magnum.
Up your arse, M!

I've never really made an effort at appreciating blended scotch - and perhaps these fictional celebrities might be on to something. If any of you can recommend a worthy spirit to start with - I would appreciate it.

Have a great Friday.
Posted by Glen Filthie at 07:16