Awhile back I scratch built an RC multirotor model and just loved it. These things fly better than RC helicopters. Mine was festooned with those stupid little Disney Minion characters and I flew that thing in empty parks, ball diamonds and out in farmer's fields. One day I was aloft in winds I didn't have the skills to fly in, and the model was lost with all hands. Ya don't get attached to these things because they ALWAYS crash. Usually they die when you ask them to do stunts and maneuvers they aren't capable of. Unless you are an all- seeing oracle with exceptional maintenance abilities something or some component fails and kills the bird too. 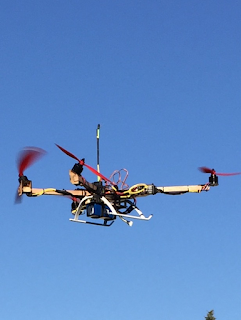 Crapcopter I
RIP
Of course when the Crapcoter went down I was mildly amused to discover tat I was heart broken. I had had to learn a bunch of electronics and computer skills to get that POS to fly. I'll bet I sunk 40 hours and a couple hundred bucks into getting it off the ground. When it crashed in the bush and was lost I was bummed right out. It would be about 6 months before I got over it and built another one. This one is superior to the old one: the flight control computer is light years ahead of the old one, the electronic speed controllers are the size of my fingernail, and my battery is a massive 6400mAh unit that will keep me airborne for 10~12 minutes. The FPV cam is superior too. My new one is better in every way...but I still miss that junker in the pic. Gawd that thing was cool.
Let's up the game!
Last night we watched a documentary on the folks that put the probes 'Spirit' and 'Opportunity' rovers on Mars. The geeks, pencil heads, beardos and weirdos involved with the mission were all on and when they talked about their babies they became animated the same way people do when they talk about their pets or kids.

Awwwwwwww.
Why, aren't YOU just the cutest little bugger? Can he
do any tricks?
These rovers do nothing BUT tricks - some of which border on Black Magic. Consider:
- these babies operated on a planet 10 light minutes away! If he falls in a hole it will be 10 minutes before the geeks at mission control find out about it! Try driving when you have to react to obstructions and hazards ten minutes ahead of time!
- runs like a hot damn in temps that bounce around from about -17C ~ -150C. How in blazes do ya keep batteries running in that?
- just hitting the planet is like threading a needle from ten miles away. To put the rovers down safely in an alien environment under adverse conditions with a 10 minute time lage? Not only once... but twice? 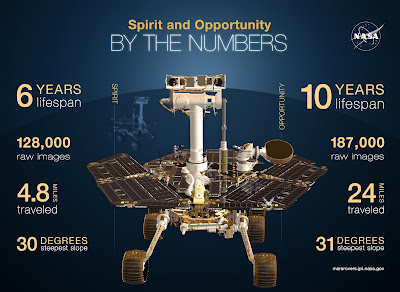 - they were designed to go about 600m in that environment and maybe function for a couple months.
The interviewees of the documentary became animated and happy as they described how they and their bots met and overcame the challenges. As time went on, though, and the machine's performance slowly degraded - they became somber and morose. One day one of the probes got mired in sand and stuck. The other just kept going until one day - it didn't. The machines stopped talking to their humans back on earth and everyone was stuck with the same long face I had when my Crapcopter crashed, HAR HAR HAR!
Rousing himself from his memories, one of the mission directors grumped that he hoped nobody ever found these probes because - by today's standards - they're junk! And then the fellow was happy and chipper again, talking about the next probe, and the materials and technologies it would have. 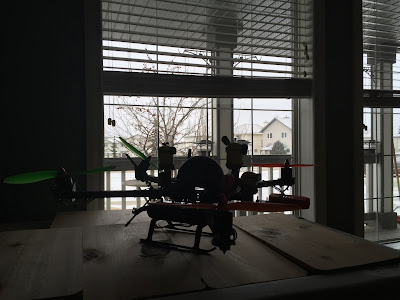 The new Crapcopter has provisions for altitude and position hold, GPS guidance,
sonar assisted collision avoidance, autopilot/return to home features, on screen telemetry displays - and is essentially a child's toy. Making that stuff work takes an applied and
determined adult... for now.
Watching those geeks sweat bullets to make the bot execute a simple command made me realize something.... The game is always the same, whether it's here at Castello Di La Filthie or at the Jet Propulsion Labs in Pasadena.
And - the mission never ends.  ;)
Posted by Glen Filthie at 09:39