The other day I got triggered by a blogging acquaintance that seems to be enamoured of a lady with predilection for edged weapons. All is fair in love and war and if our boy's found true love with a lady that has a penchant for axe murder - who are we to judge? Let it not be said that Glen Filthie is a judgemental and intolerant man, HAR HAR HAR! In any event, I guess our man turned in a dismal showing at the knife and hawk toss game. It all brought back similar experiences I had had with the black powder geeks at my gun club - and I fired off a few quick emails to some guys I haven't seen in a long, long time. Way too long.


There's a dwindling number of black powder geeks at my rod n' gun club. They are an odd but entertaining lot. Most are really old farts that build all their gear from scratch just to keep their hands busy. Sure, they might shoot when we have the big Rendevous in May... but they spend most of their time round the campfire flapping their gums! The younger ones tend to be eccentric weirdos and beardos for whom smokeless suppository cartridge guns was merely a passing fad.


Anyhoo, for that lot, the knife and hawk toss game is serious business and when it is  'game on' there is no quarter asked for, and none given. I actually like seeing the old guys engaged like that - the older I get the easier I find it to not give a damn about anything and for them - watching them play to win just seems to make 'em young again for awhile. One year Old Paul stirred up a chit storm when he went into the event with what I (and others) called a Spontoon. 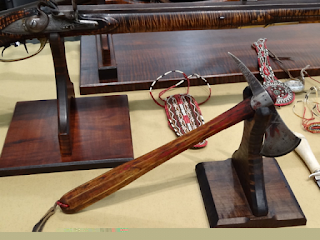 When ya throw a weapon like this at the hawk toss
you get an advantage because the thing can
stick in the wood both ways.


Despite his cheatery he didn't win - but it was the very idea of the thing that set the honourable members of The Edmonton House Brigade at each other's throats. It was so controversial that the VP of the club was forced to write to the National Muzzle Loading Rifle Association (NMLRA) in America for a resolution: was Paul's weapon legal for the knife and hawk toss?


Those guys are like The Vatican for black powder geeks. They have historians, amateur AND professional - that specialize historical details like this and they make the rules for the games we play.


I never found out how that one turned out. It was years ago and I had drifted out of the black powder community at that point - so for the hell of it I sent an email to another friend asking how that had all shaken out. What did they decide? 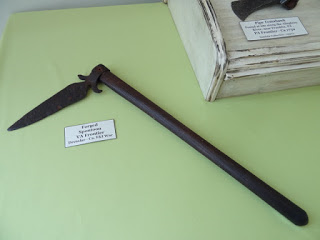 Turns out that THIS is a 'spontoon'. It's a curious,
vicious weapon made exclusively
for warfare. The more practical minded
buckskinners and mountain men would almost certainly carried hawks.


So? What is the text book definition of the tomahawk, then? Welp - turns out there isn't one because there are a couple common variants. 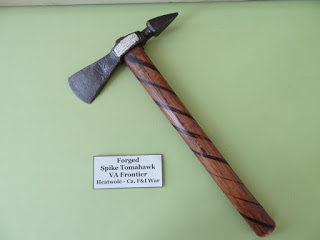 This is correctly called a 'spike hawk' and is not a spontoon
as I had believed. 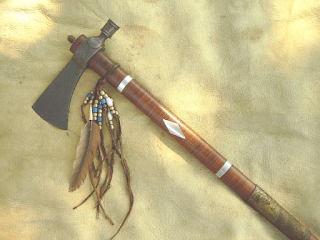 This is a PC (period correct) ceremonial pipe hawk. That's actually a bowl on the other
side of the blade and the handle is hollow. You
would never use something like this at a hawk toss. 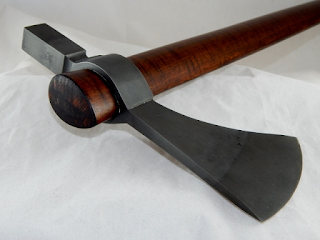 For the purposes of our game the conventional hawk is taken to be
something like this - with one 'sticking' blade only.
Permissible variants are not really spelled out as the game is more about fun
than rules and regulations.


I haven't shot my blackpowder muzzleloader in ages. I miss it. Shooting muzzle loaders is best savoured in the winter time for some reason. There's a peacefulness that settles in Alberta's forests in the winter that is just perfect for the unrushed nature of black powder geekery.


I'm gonna need to procure a good hawk and throwing knife too - one of these days...
Posted by Glen Filthie at 06:16