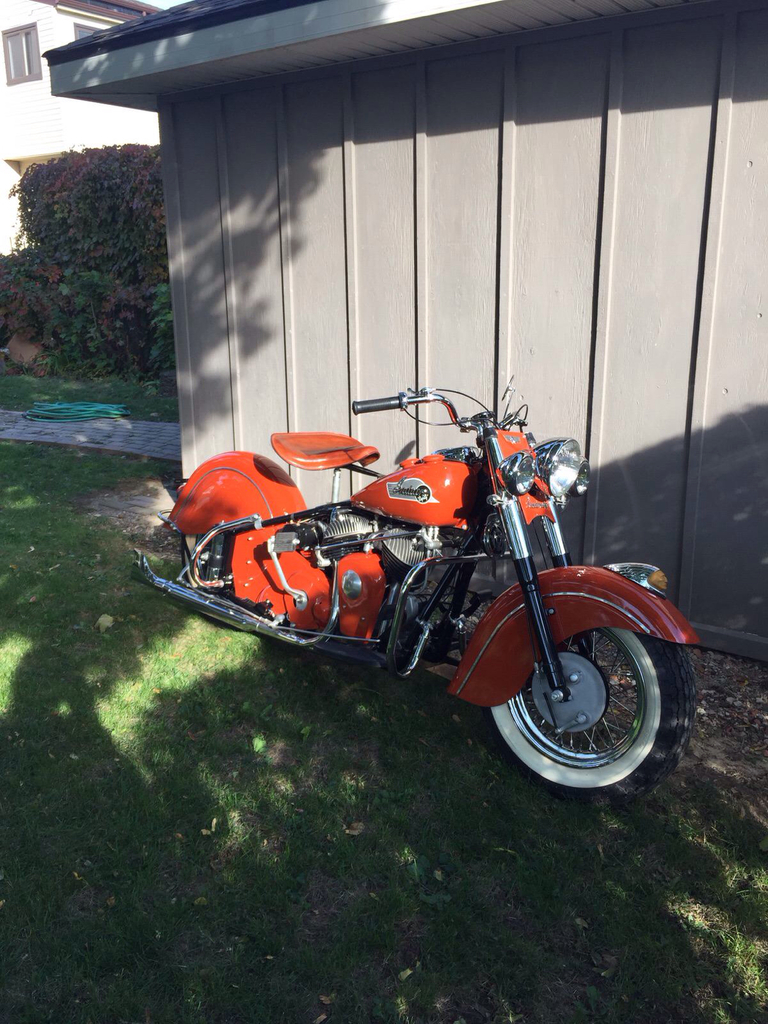 GIBMEIT!!!!
I love the 'trash can' heads of the old Indians.
This one is in Putrid Orange - a colour that was banned as a crime
against humanity shortly after the 70's.
I would give my left nut for one in Lime Green.

One often hears the sentiment from the older old farts that 'they don't build 'em like they used to'. And no - they don't. The reason for that is that today's cars and motorbikes are light years BETTER than anything built as recently as 10 years ago. My big cruiser, for example: you change the oil and put gas in it. Every other year ya do an air filter maybe. And you replace the tires when they burn off. These old Indians and Harleys are FAMOUS for being finicky and fussy to run. Harley, prior to 1980 - built overpriced buckets of bolts that were a rip off at half the price. I know, I could get shot for saying that in the wrong place and it would be a justifiable homo-cide, but the truth IS what it is. (As a sop to the cool kids, I will admit that Harley has since upped its game and is producing much better machines today - but they're still grossly over priced).

Some of the younger kids (I was one) lust after these old machines not knowing the score about them. A bike like this comes out at a parade or civic holiday or for special occasions AND THAT'S IT. Parts are unobtanium - you either scavenge them at a price that would choke a Albertan oil man, or you make them from scratch - and the machinists that do that kind of thing don't grow on trees. This machine is a work of love. You don't own a machine like this, you take care of it for the next owner to pass on to the generation after him. These things are better thought of as artifacts.

If you need a machine for getting around, be sensible and get a modern machine made for getting around. If you want to be smart about it - get a metric bike. They are dirt cheap and more reliable than the Harleys and modern reincarnations of the Indian, and infinitely superior to the old antiques like this.

Being smart is often incredibly difficult and painful sometimes.
Posted by Glen Filthie at 06:32