Prepping: You're Doing It Wrong

Yannow it just amazes me that the people that are least able to do for themselves - are the ones advocating civil/race war and genocide, or chimping out in riots like the one in Ferguson. There's any number of black baboons on the internet urging the negro race to make war on Whitey. They're serious too. AND - they're educated, some of 'em. Sure, they got phony degrees given out by liberal universities to undeserving token vibrants - but you would think they'd have picked up basic math before they 'graduated'. If those gibbons ever get their wish for full blown race war, they will wish they hadn't... assuming they survive it. The very fact that growing numbers of stupid people are pushing civilization-ending agendas should have the rest of us prepping like mad.

So it was that I learned that all my prepping, and that of the experts - was being done wrong.

When I tried to explain to our senior friend that the idea behind prepping was that you wouldn't have to live like an 'urban outdoorsman' by prepping - he got kind a tetchy. I shouldn't tease him but stupid people can be so much fun sometimes! HAR HAR HAR!!!! Shoot - I shouldna said anything to the old bugger at all really - he's old and not that bright and it is unfair to make sport with such people. It's his life and if he wants to expend it in such a fashion, Darwin, Murphy (and Filthie) will thank him for it and smile, HAR HAR HAR!!!!

I don't think a bar of soap in a sock is gonna work on
this guy - but if you wanna
try him - I will not stop you. I'll just head for the hills,
thank you very much.


When I first ran into Wirecutter's blog I became aware of the III Percenters. I know everyone's pretty much given up on the concept and that it is in the hands of a few nutters now... but I think the original vision was valid and worthy. Washington's top brass have bomb shelters, back up, and extreme measures designed to protect America's ruling elite in the event of war or disaster... and the common man should too. I remember them talking about having a place to fall back to, where if the unthinkable actually happened - there would be a viable, workable contingency plan for restoring society and for rebuilding. It made me feel better just knowing that somebody had a plan besides shitting on the sidewalks, or thumping somebody over the head with a bar of soap in a sock and stealing their supplies. (Fair warning - in dire straights, my AR15 will trump your bar of soap in a sock. My probable survival strategy in that situation would be to shoot the perp, leave his body out for the birds and as a warning to any other morons that might think to try me. I shouldn't have to say this, but stupid people are what they are: DON'T BRING A BAR OF SOAP TO A GUN FIGHT! 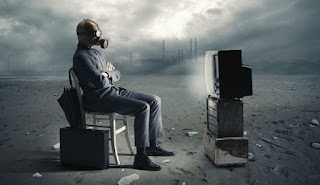 This guy? Yeah, you might be able to take him out with
a bar a soap in a sock. Unfortunately all he has
is an idiot box...


I'm no real prepper myself. We can prolly go 10 ~ 30 days if the lights went out right now. Cut that in half if I have to look after and share with others. I won't get any more specific than that but suffice it to say I can defend myself against roving rodents hoping to best me and loot me with rudimentary weapons. In any event, my preps aren't enough but sadly - they are light years beyond what a lot of people have done.

A couple years back I got booted off a sportsman's chat forum when the Bow River in Calgary flooded and reports came out that drinking water was at a premium.  The nooze said that the going rate for a flat of water bottles was around $40.00 and my position was that when the lights go out, and supplies become a matter of survival - you can expect shite like that and if you aren't prepared...you're gonna be shelling out $40.00 (or more) for a flat of water and it will serve you right if you haven't done anything to help yourself. There were a lot of panty waists and social justice warriors that were horrified and decided that my opinions weren't correct and that I had to be dispensed with! HAR HAR HAR - Can't blame 'em for having good taste, can ya!  :)

I ain't gonna scold anyone here, because I am not adequately prepared either - but at least I have the sense to work on it and you should too. When people get hungry, they get downright nasty and if you are on your own - it makes sense to be prepared.
Posted by Glen Filthie at 16:05