Sincerity & Honesty In The Age Of Hook Up Culture 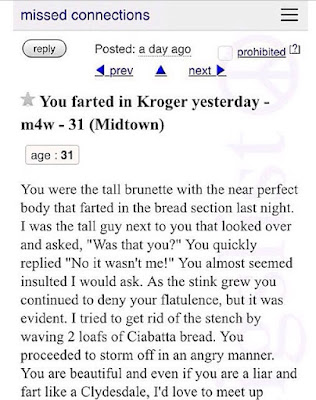 The Fart Game is for men and for men only, ladies. Hell, you're not even doing it right. There was a time - so I'm told, that our women were demure queens that were always made up, always dressed to the 9's, and would rather die than chit themselves in public.

If you are hellbent on playing the Fart Game ladies, do it right: go big or go home! The other day over at Uncle Bob's treehouse I cut the cheese and laughed as the boys retched and gagged! Take that, ya pussies!!! My conduct was beyond dispute; I took ownership of my indiscretion, and let the boys know exactly who was in charge at that point in time.

Then Quartermain opened up with a barrage that left us deaf! The dead flies bounced around in the light fixtures like dice in a cup...the windows rattled in their panes... dust drifted down from the rafters and the noise scared the living chit out of the cat! We didn't have any sophisticated instrumentation to measure... but we're pretty sure he hit a perfect 10 on the Rectum Scale. It was Hell On Earth! GAH!

I was going to give out some scholarly lecture of the Manosphere persuasion on proper male/female relationships and conduct... but sadly, I don't do all that well around women either.