Tax The Chit Out Of 'Em!

I love rural people. They just seem to develop common sense on their own and applying it in life is taken for granted.

The idea of taxing the hell out of smokers to persuade them to give up the weed or finance out of control spending offends me on general principles too. I don't even agree with taxing them to offset the impact they have on healthcare systems. If you do that - what next? "Filthie - yer putting too much salt on that steak! And Jeez Louise - marbled meat? Have you ever heard of cholesterol? Are you actually going to drink that beer? I don't think so! What's this? That cup of pop is way too big!!! No, there'll be no dessert for you, ya fat slob!!! Your BMI is way too high..."

I have a message for you health Nazis out there:

No, I won't eat that bar of soap - it's not part of my diet regimen! HAR HAR HAR!!! This is why you Yanks need to turf Obuttholecare too - because this is exactly where your gubbiment is heading. You will be expected to foot the bill for gold plated health care but won't be able to access it because you smoke, or you weigh too much, or you aren't one of the cool kids. We had this same BS up here in Canada ages ago. The liberals and commie NDPers (we call these bungholes 'Dippers' when we're feeling charitable) - push Universal Healthcare as part of their mantra. But - when senior liberal and Dipper politicos get sick? Those assholes were on the first plane south to the posh private clinics in America. Former leftist slobs that did this include Jean Poutine Cretin and Gassy Jack Layton of the NDP. (Gassy once got caught with the johns when the RCMP raided a cat house - with an under age prostitute. I suspect that like Hillary Clinton, he got let off because he wasn't mentally fit to stand trial, HAR HAR HAR!)

In any event, this blog is getting awfully smelly because of all the politics going on. Rest assured, I shall dump the bowl and give it a rinse soon!

In the meantime, it's Friday. Eat what ya want and die like a man, dammit! 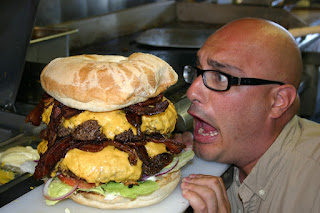