Fair warning: I am talking out of my arse here, so anything that follows is worth exactly what you paid for it. 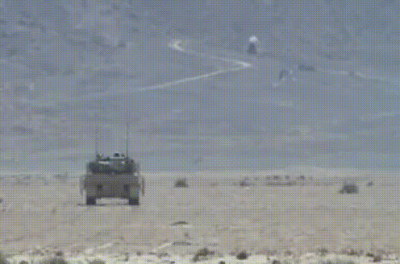 Dunno if this GIF works or not...but:


I ask this in all seriousness: Can somebody tell me why are we still bothering with tanks? To quote Sterling Archer, "Hello! I'm Captain Yesteryear with a message from the past!!!"


That damned tank is a widow maker the same way a Light Horse Regiment would be on today's battlefield. The Chinks are selling rudimentary shoulder fired missiles that can put that obsolete armoured trash can out of commission faster than you can think about it, and even disable modern tanks. The Yanks, Euros and Soviets are selling more advanced weapons that will take out their own more advanced tanks should they fall into the wrong hands - as they inevitably seem to do.


About 5~7 years ago I was watching a documentary on drones. At that time they had autonomous drone programs that could successfully identify and engage enemy targets roughly 60% of the time. That is orders of magnitude beyond acceptable error for actual deployment... but the algorithms and sensors required for a fully autonomous drone will be coming out of the Skunk Works in very short order. Stuff as little as three years old is hopelessly obsolete today when it comes to microprocessor and firmware based weapon systems. Will western people stand for the idea of fully autonomous killing machines?


Prolly not...but they probably should. Friendly fire incidents are heart breakers but I can see the day when judgement calls like that are better off being made by machines than by humans. We are entering an age when the weapons of our fathers are unequal to the tasks that face us - never mind the weapons of our grandparents.


But whatever. I'm sure that between Murphy, Darwin, and the politicians - we can come up with new and exciting ways to kill us all I suppose.