Sounds like the Trumpster has disavowed the more nasty elements of the Alt-Right.

I read Vox Day on a regular basis. For the most part he's your typical pasty faced kid with an attitude that is popular with the usual cellar dwellers and millennial turd brains that have gotten mugged by reality and don't know what to do about yet. He's capable of spectacular social commentary on occasion and has driven Hillary Clinton and her sexually disturbed fans bonkers with his deplorable stance on race relations, political correctness and social justice.

I'm deplorable too. I don't think that a reasoned viewpoint can be negated by some screeching twat accusing you of racism/sexism/homophobia/etc. I think if we are going to start beating up people for racism - we can start quite nicely with the black community and be busy with that for the next 20 years. That black baboon in the Oval Office would be a good start. To me, respect is EARNED just as contempt is, and the fact that it offends you doesn't make you right. I'm smart enough to take minorities and women one at a time and give credit where credit is due. I think we need to control our borders and cut the cultural McCarthyism and cultural Marxism. We are going to have a civil/race war if this keeps up and at some point we need to sit down and hammer out a workable peace or there is going to be bloodshed.

Ol' Voxxy, though - hooo boy! That kid is a pistol. Put it this way - I wouldn't want him for a friend and certainly not an enemy. There is no question he's smart - but people with book smarts often find themselves short of street smarts. I dunno why that is - but that's the way of it with Vox. Vox and his fanboys thought that Trump was gonna ally with them and start making Murica great and white again - and that they would be at the front of the parade.

And of course, just as I predicted, Trump threw them under the bus as soon as the Alt Right outlived its usefulness. Vox is also a mouthy prick and his tribesmen have become a political liability. They were great as cannon fodder against Hillary and her lickspittles in the media...but beyond that they aren't much good to anyone. That's not to say Trump won't use them again if it becomes worthwhile - but he is going to play them the same way he's playing the Hildebeest

Trump is a money man. He has no attachment to ideologies or the idiots promoting them. He sees relationships in terms of investment and return. He has no investment in the Alt Right, and his only use for them is where their interests run parallel. To make America great again, Trump is going to need the Left on board. Most liberals are very well spoken, wealthy and capable. Their problem is that they live in a bubble and have weaponized willful ignorance as Jim says on his blog. All Trump needs to do is pop that bubble - and the Left will fall in line. He's already ahead on that - the media has been kicked to the curb and they can't dictate public opinion anymore. He is going to have to come to terms with the blacks. The niggers are going to have to go back to their slums and stay there for their own safety - and intelligent blacks will need to be cultivated to speak for the community rather than dullards like Obama and Sharpton.

The question Trump is going to have for his team and for America, going forward - is this: Do you have something to offer America? Is it something that will make a buck for us and benefit us? No? 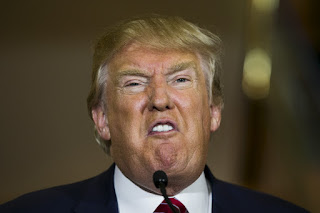 
I would love to see Hillary carted off to prison along with her idiot of a husband. I would love to see a wall up to keep the beaners out. I would love to see the moslems loaded onto garbage scows and sent back to their home countries. I would like to see the Black Lives Matter folks on a chain gang picking up garbage beside the highway. But...there's more money in it for everyone to force these idiots to behave themselves and start doing something productive. Donald has to create conditions where people who are deliberately and intentionally stupid - like the negroes - they get punished and are forced to feel the consequences of their actions. If they do well they will need to see rewards for their work and effort. In a way - he needs to be a peace maker and a team builder. America has had its  affirmative action experiment with community organizers...and you can see the results.

Interesting (but better times, IMHO) are in the offing.
Posted by Glen Filthie at 10:10