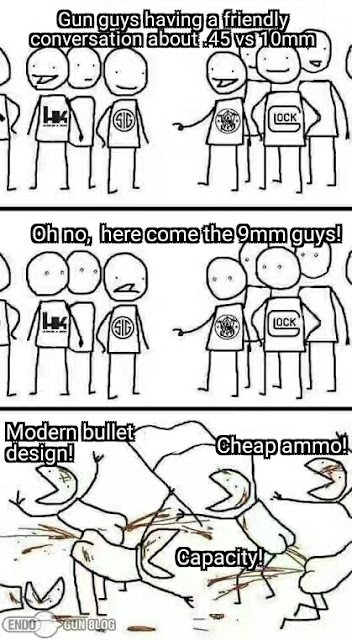 And every time they break out, everyone ends up covered in shit!

I have shot more soft targets than your average Navy SEAL. I've shot a few animals and seen a ton of them get shot with a bunch of different calibers. Ya can't kill 'em any deader than...DEAD! Use a good bullet. Chamber that in a good rifle. Put the bullet where it's supposed to go - and the freezer is full. Take stupid shots, or try to compensate for lack of ability with ballistics and firepower - and you have wounded game. With the herbivores it's a tragedy. With the carnivores it's a dangerous tragedy. With humans it often is a fatal tragedy.

I know what bullets do to bone and tissue. It isn't even an argument. At self defense ranges, the 9mm will do what the .45ACP/LC, the 10mm or any of the big magnums will do - it will RUIN a bad guys day and more likely end it. Permanently. The turd covered boys in the pic have it all right. The 9mm offers all those things and will still do what the others will do. The 9mm is a super starter gun and is a great gun for women and youngsters as well as grumpy old farts.

I had one decades ago... and then bought a .45 and never looked back. I've got four of them now. I reload, so it's cheap. Back in the day I was a decent shot so I didn't need the capacity. If I had to fight with a gun I suppose I could stoke that thing with premium bullets and hot loads and put a decisive end to any failed liberal social experiment that chose to trifle with me.

My reasons for going that route are pretty much bound up in tradition. I like guns with romance and nostalgia. That - and the slower .45's shoot cheap cast lead better than the fast 9mm's. But for you - the best gun for you is the one you have. If you're shooting paper targets - run it on patty-cake target loads and make sure you can use that thing right even when the chips are down. If you may have to stake your life on it or you're hunting - stoke that thing to the balls with the hottest, most accurate ammo you can buy or make. Verify it's performance on the range with a chronograph.

Anybody that looks down his nose at other shooters because of the caliber of their guns is an idiot - or he's a noob that hasn't been hit by enough shit yet.