A Day Of Infamy Indeed

I shouldn't get worked up about such things ... but I do.

Back when I still spoke with my mealy mouthed in laws one of their favourite ways to rev me up was to engage in political or historical fuckery. There's no nice way to say it. My pasty faced brother in law liked to say that the guys running the radar on the morning of Dec. 7 deliberately failed to report the incoming wave of Jap torpedo planes because the eeeeeeeeevil American elite wanted to be in a war with Japan and needed the justification for it. So - they allowed the Japs to scuttle most of their fleet in Pear Harbour.  Ugh.

Then he would start pulling historical 'facts' out of his ass to 'prove' it. I know him, he's dumb enough to believe shit like that and his turd brained father would join in and regale me with how WW2 was all about money and self interest and just a case of imperialist America picking on the rest of the world. The father in law gave me a book written by some liberal f-knuckle called 'Flyboys' - about American aviators in the Pacific theatre. It was a contemptible screed, written by another leftist shit-lib. In it he described in great detail how the ignorant American electorate sacrificed their kids for nothing in a war about nothing that settled nothing. I returned it after a few chapters. It was all I could do not to set the fuggin thing on fire along with the moron that gave it to me. 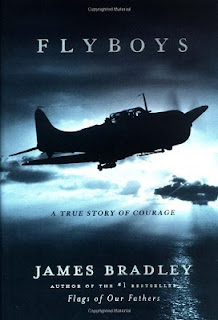 If I ever see this book again - even on your coffee table...
I am going to wipe my ass with it and burn it.


As a Canadian I hereby state for the record that Americans have NO BUSINESS apologizing for their conduct in the war against Japan. Further - Japan started that war under one condition: no quarter asked for, none given. They lost by the grace of God Almighty and they paid dearly for their hubris - as they damned well should. Any idiot wanted to collectively accuse America of war crimes in that conflict is to have a history book shoved down his gullet post haste! Japanese war crimes in Korea, Burma, China, Mongolia, the Phillipines etc etc - are a matter of historical record.

I've been polite. I've listened to these ahistorical f-tards present their case. I will hear no more. If anyone wants a fight with me, they can have it by parroting this drivel in my presence - but I am swinging first!

To The Greatest Generation: those of you still alive are national treasures. Please accept my apologies for the conduct of your descendants, and allow me time to adjust their attitudes - with a baseball bat!

Your courage, sacrifice, and integrity are only in question with those that have absolutely NONE themselves.
Posted by Glen Filthie at 13:37