Uncle Bob remembers Carrie Fisher and pervs out over expounds upon his fondness for crazy women and flatulent dogs. (I always knew there was something seriously wrong with Bob but of course, I was too polite to say anything).

I was never all that taken with Carrie Fisher myself either, even as a teen. Oh sure, she was cute as a button but she was old - like Uncle Bob! How old would they have been in the mid 70's? Early twenties? HAR HAR HAR!!! But I absolutely fell in love with her a couple years back when she was chasing Sheldon and the comic book-loving geeks off The Big Bang around with a baseball bat. Beat the stuffing out of them Carrie!
HAR HAR HAR!!!
They need it!!!

I did not like Princess Leia as a character. Or I should say, I didn't DISLIKE her - she just struck me as a two dimensional character required for a very simple plot. She was the first of the 'powerful woman' heroines that would come to infest Hollywood as they do in the present day. Some women can play that role. Sigourney Weaver did it in Aliens. Unlike Carrie (in my opinion) - Sigourney could take a flat comic book character and make her live on the screen. 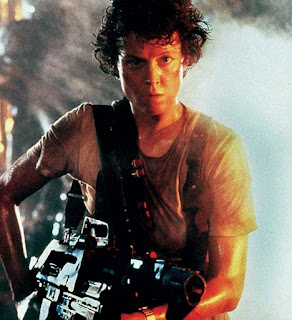 I would not mess with this woman.
If I had to face acid blooded, man eating xenomorphs...
I might even put up my trusty AR15 and gallantly let her have the
point while I took the six!

Take a memo, Hollywood! These are the last two powerful, intelligent women that were anywhere near being believable. Everything just seemed to go to hell afterwards for feminine heroes. I dunno about you, but their new female heroes strike me as bitchy, unbelievable and unlikeable. Some were so bad I found myself cheering for the bad guys. Who writes this chit? 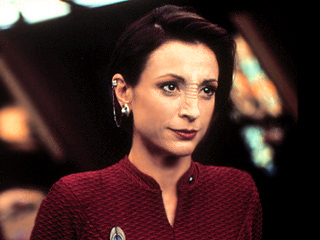 Ugh. I wrote of Star Trek  100 years ago because of this cankle blossom.
She could beat up 8 four hundred pound monsters,
bitch slap the space station's resident mysoganist sex pervert AND
deliver a politically correct and sanctimonious social justice lecture without
missing a beat or breaking a finger nail! Isn't that AMAZING?
Hollywood's been doing this trope to death ever since.


Crap like that kicks you out of the story and leaves the viewer (or me at least) - wanting to see what's on next, or going downstairs to raid the refrigerator or maybe take an intermission to go take a dump. What is it with Hollywood and these bitchy, phoney women they keep throwing at us? And why won't they stop it even as their sales dive?

I dunno where I saw it but Some Dude off the internet phrased it this way: Most of Hollywood's screenwriters are younger men writing for men even younger than themselves for the most part. His theory was that many of these young men grew up in single parent homes without a father, and that these 'strong, powerful women' are a manifestation of the screenwriter's fetishizing their childhood single moms.

I watched the re-make of the Magnificent 7 last night. The original had all icky white guys playing the roles and the new one fixed that. The new cowboys were negroes, Indians, beaners, chinamen and of course strong powerful women. Naturally, all the bad guys were icky white men. I seriously need to stop renting this shit too. 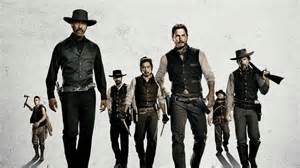 Oh fer gawdsakes!!! What is it with niggers and pistolcraft?!?!?
No, you won't hit anything holding your Glock 9 sideways.
And no - ya never carry your iron on a cross draw rig!!!!
Why, if I were a black hatted, black hearted villain from the Old West,
I woulda put these flimps to work cleaning
dishes and spittoons in the saloon!!!


In any event, I just thought it was an interesting theory to explain an infuriating social phenomenon. Sad and awful to say but I believe it to be true: if you are an actor or actress in Hollywood from better times, working with better people, and you're knocking on Death's door... now would probably be a really good time to go. I hope in the next life, that there are proper roles for women like Carrie to play.
Posted by Glen Filthie at 14:15