One of my New Year's resolutions - if I made them - would be to start downsizing and decluttering. For the last 20 years I have been amassing guns and ammo and I'm dealing with the tail end of another bout of gun fever - I wanted to buy a Black Powder Cartridge Rifle (BPCR) awhile back. By the grace of God, I still have my money and they still have the rifle. Some other lucky soul is going to get that one - and good on him. I may yet get a BPCR... or not. I have tons of guns - and need to thin out the herd. Let's start with pistols. I have:


Dear gawd - who's the idiot that bought all these guns?  All that is in addition to the rimfires and my percussion cap n ball pistol! I am out of control!!!! It's time to make a decision and decide on ONE .45. 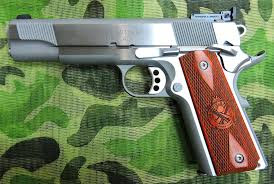 May the cool kids, St. Browning and St. Cooper have mercy on my soul...

The iconic 1911 pistol enjoys cult status among gun geeks. Entire novels can and have been written about the reasons why - I won't go over them here. I loved mine. They feel good in the hand and balance well, they shoot like a house on fire, and are as reliable as any revolver when they are properly tuned and maintained. They worked for your dad, your grandad, and prolly your great grandad too! Hell, they will be working for YOUR great grandkids. This gun has a storied career in action all around the world.  You can't argue with success.

Except - in rare situations - you can. 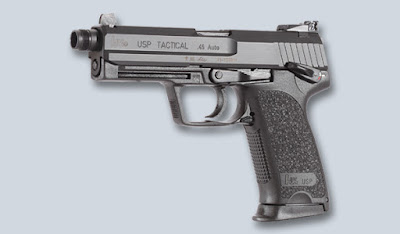 In the gun community there are cool kids and pariahs. I guess I know where I fit in because awhile back, all the self-proclaimed experts were shitting on HK. One in particular comes to mind - he was a fat, obese slob blogger who would probably have a stroke if he had to run 100 yards. He became famous in our community when somebody asked why he and his chums hated HK, and he replied. "Because you suck, HK - and we hate you." Yeah - that is what passes for wit and intellect in the gun community all to often. Full disclosure - HK has a reputation for treating civilian customers poorly. I've never had an issue; but mind you, I only have about 6000~8000 rounds down the pipe of mine and it has worked flawlessly. But why listen to an old stubfart gun club duffer or the squaddies at SOCOM? What the hell would they know? HAR HAR HAR! Can't blame 'em in my case, if I were them I wouldn't listen to an ass hole like me either! HAR HAR HAR!

But, I would listen to the squaddies... and there is a reason they dumped the 1911 and went to the HK. Quite simply, it's a better gun even though it's uglier than sin to look at. Has a ten round mag opposed to the 1911's six standard six rounder; it makes use of indestructable, lightweight polymers in the frame, it's even easier to strip and clean than the 1911 and has an ambidextrous safety - right out of the box. The operators at SOCOM don't change out their gear on a whim, they take their armament very seriously and they torture test their gear to make sure it will hold up when they're in the soup. I love the guns of my ancestors, I bow down and respect their memories and traditions - but if I ever end up in the soup and my life or my wife's is riding on a gun... this will be the gun that decides my fate. (Which means absolutely nothing, really, because it's almost illegal to carry in Canada and I have no real need to for the most part...yet). But still, if I had to....

Nobody is perfect and the HK USP is no exception. The barrel on the HK has polygonal rifling which DOES NOT GET ALONG WELL WITH CAST LEAD BULLETS. This is another dog-fight in the gun community - cast lead bullets are cheap and accurate in conventionally rifled pistols - like the 1911. But cast lead can be soft and leave traces of itself in the barrels of polygonal rifled pistols and if enough accretes there... the gun can blow itself up. HK specifically voids their warranties if cast lead is used in their guns. Having said all that - many gun geeks WILL use cast lead and have done so for years without a problem. I am probably one of the few guys that takes HK at its word - I use jacketed bullets only. I've also heard complaints about price. It's crap of course, a premium 1911 is gonna run you the same or more. You get what you pay for.

It's a big gun, and come to think of it...I actually DID carry it years ago back when the wife and I were camping in bear country in the early spring. I wore one of those reflective striped red surveyor's vests with all the pockets and the pistol fit nicely into one of the bigger ones. Bears can get hungry and surly in the spring when they come out of hibernation and the pistol was for self defense only.  Even with full power loads the .45 ACP is no bear gun and if you have one when you face an angry bear... you are still in a heap of trouble but your chances are greatly improved. I never saw a bear on those trips and never had to use it. On the range though - I shot it exclusively for years and just loved it!

One day I was at the range and an idiot squirrel was clowning about. The little bastid must have been deaf because he would scamper across the gun benches, root through our stuff looking for food and was tame as hell. Me and the boys fed him all that summer with any scraps we had. One day he was on the range and there was no chasing him off. We would shut down, drop the curtain, chase him away - and the little bugger came right back and climb up the backstops to chitter at us. I finally got sick of his shit, and very carefully put a round into the dirt about 3 inches away from him. He scampered off and this time he stayed away, HAR HAR HAR! That is as close as I want to get to serious deterrent work with a pistol. On my range, the critters stay behind the firing line or else!!!

So, let it be so. I am bidding farewell to the 1911, and the cool kids - and heading into the wilds of Gun Geek Forest armed with my HK. I dunno if they even make these USP guns anymore, but if you are thinking of an auto pistol for yourself - make sure you at least look at the HK's. They aren't for everyone, they annoy the chit out of poseurs and liberals ... but you will know it if they are right for you.

Good shooting, and you old farts - make sure ya fill those score cards out honestly! Filthie is watching you!!!!
Posted by Glen Filthie at 09:21