If camping means tenting to you as it did to me - the next most important piece of gear you'll need is a good tarp. Don't buy those shitty blue ones from Ukranian Tire - they're so damn cheap they'll probably rip on you on the first trip out. A good tarp costs money - and is seriously worth it. The rule with a good tarp is the same as a good tent - ya gotta dry it out! Hang them up in the basement for a couple days at least! I've seen more tents and tarps ruined because they were put away wet than by any other mishap.

The secret to rigging a tarp is the same as rigging a sail. You'll need some good knots but nothing too fancy. Tarps pull and tug in the breeze and I've found it impossible to tension them with knots alone. Regardless of the knot, rain and wind just seems to loosen everything. The best method of stringing a tarp that I have found - is just the good ol' fashioned wood cheater: 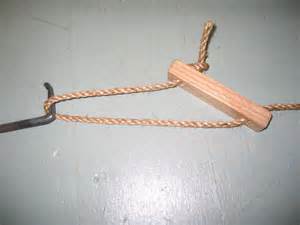 They're simple and they will slip too - but ya just zip 'em up tight again every couple hours and they'll keep the sun AND the rain off! I can't imagine how many people I've seen ripping their hair out by the roots trying to keep a tarp up tight. Sure, tensioning them periodically might be a bit of a pain but that is what sailors do - their sails are always needing to be trimmed and futzed with an a tarp will need a bit of that too. When ya get up to grab a beer or take a leak, ya just walk round and zip 'em up before ya sit down. I will do the same and you won't even notice it. I have had my tarps hold in torrential downpours which have had the hard wall trailer gang penned up in their trailers. The only weather my tarps won't handle are gale force winds - then they have to come down and no bones about it.

Rope cheaters are a good project for the little ones. They can drill the two holes - and that's it. I used to have a duffle full of them that either me or my father in law or my daughter had stained out of sheer boredom.  :)

If you've ever struggled with tarps while camping - this is one solution for you. If there are better ones out there I am all ears.