Christmas Recommendations For The Young Outdoorsman 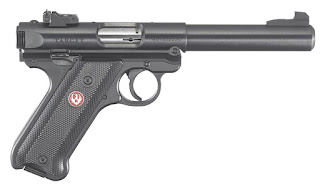 Right there. Your Christmas shopping for the young man on your list is over.

If you have a novice shooter wanting to get into handguns - here it is. That is the Ruger MK3 .22 pistol and it is the best of the breed for the money. You might get another gun as good but you won't get a better one for the money.

They're great starters right out of the box but they are absolute tack drivers with a smidge of TLC. I recommend a trigger pack once your shooter reaches a level of proficiency to warrant it. Mine has one and now that damn thing will shoot head to head with Olympic class target pistols.

I think I bought mine for $420.00 or thereabouts last year. Add another $200.00 for the farkles and trigger... and you are off to the range to play with the big boys. Some of the best shooters at my clubs are using these and it will take an Olympic class shooter to take them on when things get serious. 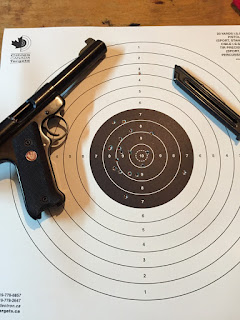 But it's cheap fun, regardless of how old you are, and it keeps otherwise troublesome old stubfarts off the street. It's an awesome way for the guys to get out or even a guy and his gal! Women are respected guests at my clubs and when they are present the boys will actually behave. Once they're gone they're all back to bein a-holes and chimps.

Trust me on this: it's a healthy, wholesome sport that you need to at least try.
Posted by Glen Filthie at 14:14